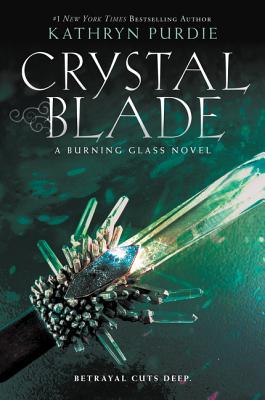 This is book number 2 in the Burning Glass series.

Fans of Three Dark Crowns and Red Queen will devour book two in the #1 New York Times bestselling Burning Glass trilogy, about a teen empath and the secret dangers of her expanding power.

Sonya and Anton may have brought about a revolution, but can they protect their homeland—and their love—with so many forces threatening to tear them apart?

The empire has fallen, Valko faces trial, and Sonya is finally free from her fate as Sovereign Auraseer. But Sonya’s expanding abilities are just as unstable as the new government of Riaznin. Not only can she feel the emotions of others but, unlike most Auraseers, she’s learned to make others feel what she’s feeling as well. And with her relationship falling apart, Sonya isn’t immune to her power’s sinister temptations.

Now, as Sonya fights to contain her own darkness, she senses a new evil lurking in the shadows of the palace. Someone from Sonya’s past has returned seeking revenge—and she won’t be satisfied until Sonya has suffered for her mistakes.

Kathryn Purdie lives near Salt Lake City, Utah, with her husband and three children. Kathryn is a trained classical actress who studied at the Oxford School of Drama and was inspired to write her debut trilogy while recovering from donating a kidney to her older brother. www.kathrynpurdie.com.

“Sonya’s first-person narration is filled with descriptions of the emotions of those around her....With this second installment, the Burning Glass trilogy hits its stride.” — Kirkus Reviews

“Filled with mystery and intrigue, betrayal and passion, Purdie’s political debut will sweep readers away to a world that is not that different from their own.” — School Library Journal

“Richly imagined, compelling, and darkly romantic, this book will leave you begging for more!” — Sara B. Larson, author of the Defy trilogy

“I feel like Burning Glass has catered to all of my YA book needs: Russian-flavored fantasy, a neat but not overly complicated magic system, a flawed but wonderful heroine, and the only kind of love triangle I can enjoy (one involving competing brothers!)” — Allison Senecal, Old Firehouse Books