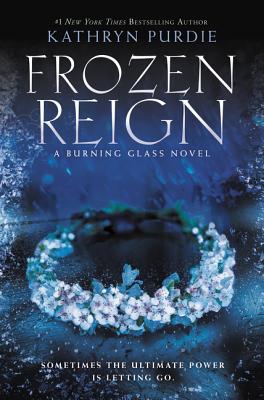 This is book number 3 in the Burning Glass series.

Fans of Three Dark Crowns and Leigh Bardugo will devour the heart-stopping finale to the #1 New York Times bestselling Burning Glass trilogy, as teen empath Sonya fights to regain her powers amidst a vengeful civil war.

Civil war is on the horizon, and Sonya is helpless to stop it. With her empathic powers gone, she can no longer protect her beloved Anton from his vindictive brother Valko, who will stop at nothing to get his revenge and reclaim his throne. Even if that means using an Auraseer to hunt—and kill—both Sonya and Anton.

Then Sonya hears about an empath in a far-off kingdom who may be able to heal her—but without her powers, finding the legendary Auraseer will be dangerous. And if she doesn’t succeed, the peace Sonya sacrificed so much to achieve will be shattered forever.

Kathryn Purdie lives near Salt Lake City, Utah, with her husband and three children. Kathryn is a trained classical actress who studied at the Oxford School of Drama and was inspired to write her debut trilogy while recovering from donating a kidney to her older brother. www.kathrynpurdie.com.

“Filled with mystery and intrigue, betrayal and passion, Purdie’s political debut will sweep readers away to a world that is not that different from their own.” — School Library Journal

“Purdie expertly weaves a complex storyline with well-developed characters in a vividly described world to entrance readers with her words.” — Deseret News

“Richly imagined, compelling, and darkly romantic, this book will leave you begging for more!” — Sara B. Larson, author of the Defy trilogy