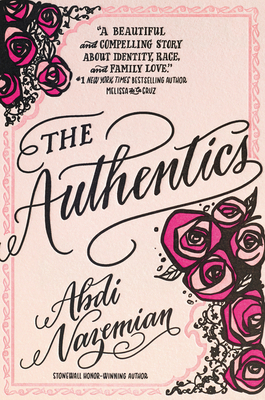 The Authentics is a fresh, funny, and insightful novel about culture, love, and family—the kind we are born into and the ones we create.

Daria Esfandyar is Iranian-American and proud of her heritage, unlike some of the “Nose Jobs” in the clique led by her former best friend, Heidi Javadi. Daria and her friends call themselves the Authentics, because they pride themselves on always keeping it real.

But in the course of researching a school project, Daria learns something shocking about her past, which launches her on a journey of self-discovery. It seems everyone is keeping secrets. And it’s getting harder to know who she even is any longer.

With infighting among the Authentics, her mother planning an over-the-top sweet sixteen party, and a romance that should be totally off limits, Daria doesn’t have time for this identity crisis. As everything in her life is spinning out of control—can she figure out how to stay true to herself?

Abdi Nazemian is the author of Like a Love Story, a Stonewall Honor Book, and The Authentics. His novel The Walk-In Closet won the Lambda Literary Award for LGBT Debut Fiction. His screenwriting credits include the films The Artist’s Wife, The Quiet, and Menendez: Blood Brothers and the television series The Village and Almost Family. He has been an executive producer and associate producer on numerous films, including Call Me by Your Name, Little Woods, and The House of Tomorrow. He lives in Los Angeles with his husband, their two children, and their dog, Disco. Find him online at www.abdaddy.com.

“As with the novels of Benjamin Alire Saenz or Randa Abdel-Fattah, Daria’s thought-provoking journey will resonate with teen readers of all backgrounds.” — Booklist (starred review)

“A beautiful and compelling story about identity, race, and family love. A must read in an age where #weneeddiversebooks more than ever.” — Melissa de la Cruz, New York Times bestselling author

“A charming and touching examination of everything that makes us who we are.” — Adi Alsaid, author of Let's Get Lost and Never Always Sometimes

“Will resonate with readers who have felt like they don’t know where they belong or who they want to be, and certainly with the children of immigrants who feel caught between worlds.” — Publishers Weekly

“Surprisingly powerful…will appeal to any reader searching for identity and belonging, particularly those whose lives include two different cultures.” — Voice of Youth Advocates (VOYA)