Healer of the Water Monster (Hardcover) 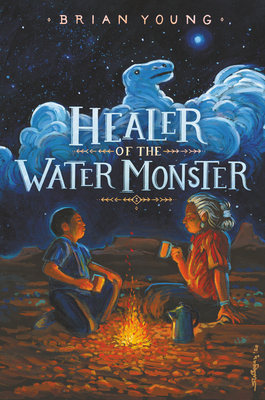 Healer of the Water Monster (Hardcover)

“Sometimes you pick up a book you're really not sure you're going to like, and you end up loving it. HEALER OF THE WATER MONSTER is one of those. Such a beautiful story--partly because the character is so sweet and complex (brave and generous sometimes, fearful and selfish others) and partly because the issues he has to deal with cross so many borders, from alcoholism and family dysfunction to trying to navigate the spirit world to save a water monster. Highly, highly recommend this book!”
— Chris Abouzeid, Belmont Books, Belmont, MA

Brian Young’s powerful debut novel tells of a seemingly ordinary Navajo boy who must save the life of a Water Monster—and comes to realize he’s a hero at heart.

When Nathan goes to visit his grandma, Nali, at her mobile summer home on the Navajo reservation, he knows he’s in for a pretty uneventful summer, with no electricity or cell service. Still, he loves spending time with Nali and with his uncle Jet, though it’s clear when Jet arrives that he brings his problems with him.

One night, while lost in the nearby desert, Nathan finds someone extraordinary: a Holy Being from the Navajo Creation Story—a Water Monster—in need of help.

Now Nathan must summon all his courage to save his new friend. With the help of other Navajo Holy Beings, Nathan is determined to save the Water Monster, and to support Uncle Jet in healing from his own pain.

The Heartdrum imprint centers a wide range of intertribal voices, visions, and stories while welcoming all young readers, with an emphasis on the present and future of Indian Country and on the strength of young Native heroes. In partnership with We Need Diverse Books.

Author and filmmaker Brian Young is an enrolled member of the Navajo Nation. He grew up on the Navajo reservation in Arizona. Brian earned his BA in Film Studies at Yale University and his MFA in Creative Writing at Columbia University. Brian currently lives in Brooklyn, NY.
"Gentle, complex characters and flawed, loving human relationships lend depth to Young’s worlds-spanning novel."
— Publishers Weekly (starred review)

"Young’s narrative weaves traditional folklore, language, and mythos with modern emotion to craft a poignant tale of family, friendship, and protecting what you love most."
— Booklist

"Visibility is of utmost importance, and books like this one deserve warm spotlights, everywhere."
— American Indians in Children's Literature