Go Where There Is No Path: Stories of Hustle, Grit, Scholarship, and Faith (Hardcover) 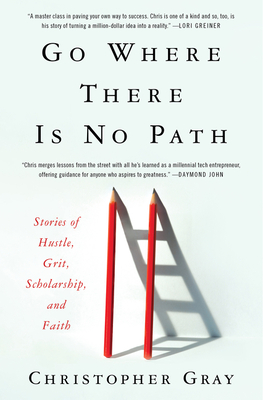 For all who dare to go off the beaten track, this is the inspirational, power-packed playbook for transforming your life and your world—from a young, Black social entrepreneur whose dorm-room tech startup has helped millions pay for college and access unprecedented opportunity.

Gray, the son of a single working mother who had him at age fourteen, grew up in deep poverty in Birmingham, Alabama. An academic star, he had every qualification for attending a top college—except for the financial means. Desperate, Gray headed off the beaten path, searching online to apply for every scholarship he could find.  His hustle resulted in awards of 1.3 million dollars and became his call to action to help other students win their own “schollys.” It inspired him to start up Scholly, an app that matches college applicants with millions of dollars in outside scholarships that often go unclaimed.

When he was a senior at Drexel University, he appeared on Shark Tank as CEO of Scholly. In the most heated fight in the show’s history, the sharks challenged Gray as to whether his app was a charity or a profitable business.  Both, he insisted, proposing a new paradigm for social entrepreneurship and netting deals from Lori Grenier and Daymond John.


At the time Scholly’s subscriber base was 90,000 users. Today the app has 4 million subscribers who have won scholarships totaling more than $100 million. Meanwhile, Gray—without help from the mostly all-white boy’s club of Silicon Valley—has emerged as a tech startup superhero now tackling the crisis of student debt with innovative, unrivaled strategies.

Gray’s premise is that when you lead with the good—confronting issues such as poverty and racism—the money will follow.  His story is proof that when you develop a mindset for success, you turn disadvantages into gold. And when you create opportunities for others, you enrich the marketplace for yourself too.

Gray shows us, we can carve out new paths to better days and leave trails for others.

Christopher Gray, co-founder/CEO of Scholly, is a regular contributor to Forbes Magazine, has made the top of the 2016 Forbes 30 Under 30 List for Social Entrepreneurship, and was one of Oprah’s Inaugural Super Soul 100 honorees as one of her favorite people. He is the recipient of the 2016 Smithsonian American Ingenuity Award. A highly in-demand public speaker, Chris has served as the U.S. Embassy Speaker for the U.S. State Department. A native of Birmingham, Alabama, he lives in Los Angeles.

Mim Eichler-Rivas is coauthor with Chris Gardner of the #1 New York Times bestseller The Pursuit of Happyness. Mim’s list of more than thirty acclaimed coauthorships includes the national bestseller Finding Fish with Antwone Fisher. Mim’s solo title, Beautiful Jim Key, has sold briskly for more than a dozen years and has a feature film in the works.

"Go Where There is No Path is an unforgettable read.? It has everything: an inspiring, against-all-odds story of growing up as the son of a single teenage mom, an entrepreneurial tale of a young black gay man whose dorm room start-up has become a marketplace legend, and a blueprint for success—for anyone willing to take roads never traveled."
— Chris Gardner, author of the #1 New York Times Bestsellers,?The Pursuit of Happyness, Start Where You Are, and Permission to Dream

"When Chris began his pitch on Shark Tank, I was immediately captivated. As an investor, I love profitable ideas that can make a difference in people’s lives. So when I heard the idea of an app to help students find money for higher education, that’s all I needed to hear before making an offer. In Go Where There Is No Path, he provides a master class in paving your own way to success. Chris is one of a kind and so too is his story of turning a million-dollar idea into a reality.”
— Lori Greiner, inventor, entrepreneur, TV personality and bestselling author

"?When I heard how [Chris] had learned to apply the lessons of hustle, grit, scholarship and faith that he saw all around him, I knew that I had to be a part of the Scholly ride. At every turn, Chris has expanded his vision. He merges lessons from the street with all he’s learned as a Millennial tech entrepreneur, offering guidance for all who aspire to greatness. Chris has made his sharks proud."
— Daymond John, CEO of FUBU, TV personality and bestselling author

"Gray represents a new breed of entrepreneur—one who at 22 changed the financial landscape for students from every background and who is now empowering the next generation of scholars and entrepreneurs. His book reveals how he pursued a vision that became Scholly—and is radically changing the status quo—and how you too can draw from your own story to stand out from all the rest.”
— Jesse Williams, activist, former public school teacher, actor, director, producer, and leading brand ambassador for Scholly

This feature require that you enable JavaScript in your browser.
END_OF_DOCUMENT_TOKEN_TO_BE_REPLACED

This feature require that you enable JavaScript in your browser.
END_OF_DOCUMENT_TOKEN_TO_BE_REPLACED

This feature require that you enable JavaScript in your browser.
END_OF_DOCUMENT_TOKEN_TO_BE_REPLACED

This feature require that you enable JavaScript in your browser.
END_OF_DOCUMENT_TOKEN_TO_BE_REPLACED