The River of Silver: Tales from the Daevabad Trilogy (Hardcover) 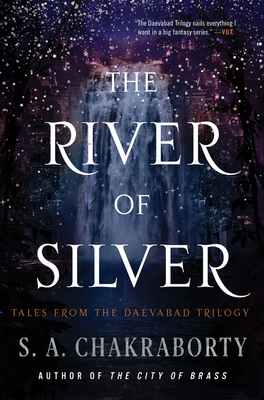 The River of Silver: Tales from the Daevabad Trilogy (Hardcover)

By S. A. Chakraborty

This is book number 4 in the The Daevabad Trilogy series.

Bestselling author S. A. Chakraborty’s acclaimed Daevabad Trilogy gets expanded with this new compilation of stories from before, during, and after the events of The City of Brass, The Kingdom of Copper, and The Empire of Gold, all from the perspective of characters both beloved and hated, and even those without a voice in the novels. The River of Silver gathers material both seen and new—including a special coda fans will need to read—making this the perfect complement to those incredible novels.

Now together in one place, these stories of Daevabad enrich a world already teeming with magic and wonder. Explore this magical kingdom, hidden from human eyes. A place where djinn live and thrive, fight and love. A world where princes question their power, and powerful demons can help you…or destroy you.

From Manizheh’s first steps towards rebellion to adventures that take place after The Empire of Gold, this is a must-have collection for those who can’t get enough of Nahri, Ali, and Dara and all that unfolded around them.

Shannon Chakraborty is the author of the critically acclaimed and internationally bestselling Daevabad Trilogy. Her work has been translated into over a dozen language and nominated for the Hugo, Locus, World Fantasy, Crawford, and Astounding awards. You can find her online at www.sachakraborty.com or on Instagram and Twitter as @SAChakrabooks.

“Much, in the end, like the world of Daevabad itself. And if this is the last we see of Chakraborty’s wildly unique magical world, it is certainly a gleaming and precious gift.” — Paste Magazine

"This story compilation is a must-have ... as it showcases her amazing characters and lush world one more time." — Library Journal

“I loved the protagonist, there was a nice cast of supporting characters, and the plot had some twists and turns that I did not see coming… Her style is vivid and colourful and very readable. The best thing, though, was the setting. Instead of drawing on the European Dark Ages and Middle Ages, Chakraborty evoked the flavours of the Middle East and Arabian Knights and the legends of the djinns. I enjoyed the novel hugely, and I just ordered the second and third books in the trilogy so I may continue the adventure.” — George R. R. Martin on City of Brass

“The City of Brass reads like an invitation for readers from Baghdad to Fairbanks to meet across impossibly divergent worlds through the shared language and images of the fantastical.” — New York Times Book Review

“Chakraborty writes a winning heroine in Nahri—flawed but smart and engaging. And her portrayal of the cultural conflicts in the magical city of Daevabad and of Ali’s inner turmoil is compelling and complex, serving as a strong counterpoint to the thrilling action.” — Washington Post on City of Brass

"With musical prose, majestic settings, and an epic story, Chakraborty’s finale to a trilogy will ignite passion in her many fans. Fervidly recommended to all readers of the fantasy genre." — Booklist (starred review) on Empire of Gold

“The City of Brass is more than a promising debut — it beguiles all the way...Chakraborty’s research and imagination are equally strong, and she deftly sets up a rich world — and ample suspense — for the rest of this trilogy.” — Variety

“Chakraborty’s first book in her in Daevabad Trilogy introduces an enchanting world of magic and treachery that will leave you clamoring for book two.” — Paste Magazine

“No series since George R.R. Martin’s A Song of Ice and Fire has quite captured both palace intrigue and the way that tribal infighting and war hurt the vulnerable the most.” — Paste Magazine

“[The Kingdom of Copper] is epic fantasy that is shrunk to the perspective of the individual. If you’re looking for a compelling, heart-rending drama that just happens to also be one of the most thought-provoking epic fantasies to come out in a long time, look no further.” — BookPage

“It was a treat to return to Chakraborty’s richly drawn world. [...] engaging, satisfying, and left me looking forward to what comes next.” — The Speculative Shelf

“Chakraborty plunges right back into the action set up in The City of Brass [...] This intriguing fantasy series appears to be well on its way to an exciting conclusion.” — Publishers Weekly (starred review)

“With gorgeous world building, compelling characters, and clashing schemes, the second in Chakraborty’s Daevabad trilogy will thrill her many fans.” — Booklist (starred review)

“With a richly immersive setting and featuring complex familial, religious, and racial ties and divides, Chakraborty’s second book in the trilogy wraps readers in a lush and magical story that takes over all the senses.” — Library Journal (starred review)

“Chakraborty manages what many epic fantasy writers have never achieved: a world where everyone can see themselves not only mirrored, but powerful.” — New York Journal of Books

“The centuries-long power struggle for the magical kingdom of Daevabad comes to a head in this marvelous final adventure in Chakraborty’s Daevabad trilogy...This mammoth finale is a worthy finish to a beloved series.”