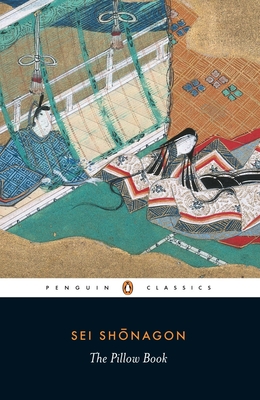 The classic portrayal of court life in tenth-century Japan

Written by the court gentlewoman Sei Shonagon, ostensibly for her own amusement, The Pillow Book offers a fascinating exploration of life among the nobility at the height of the Heian period, describing the exquisite pleasures of a confined world in which poetry, love, fashion, and whim dominated, while harsh reality was kept firmly at a distance. Moving elegantly across a wide range of themes including nature, society, and her own flirtations, Sei Shonagon provides a witty and intimate window on a woman's life at court in classical Japan.

Sei Shonagon was born approximately a thousand years ago (965 is a likely date) and served as lady-in-waiting at the Court of the Japanese Empress during the last decade of the tenth century. Her father was a provincial official, but is best known as a poet and a scholar. It is possible, though unlikely, that Shonagon was briefly married to a government official, by whom she may have had a son. Her life after her Court service came to an end is totally obscure. There is a tradition that she died in lonely poverty: but this is probably an invention of moralists who were shocked by her promiscuity and thought she deserved retribution. Our knowledge of Shonagon's life and character rests almost exclusively on the Pillow Book itself.