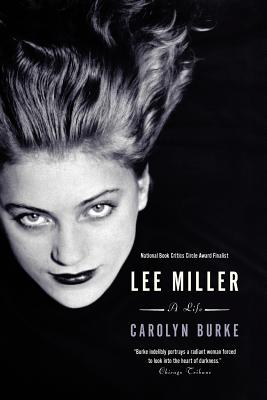 
Usually Ships in 1-5 Days
Lee Miller’s life embodied all the contradictions and complications of the twentieth century: a model and photographer, muse and reporter, sexual adventurer and domestic goddess, she was also America's first female war correspondent. Carolyn Burke, a biographer and art critic, here reveals how the muse who inspired Man Ray, Cocteau, and Picasso could be the same person who unflinchingly photographed the horrors of Buchenwald and Dachau. Burke captures all the verve and energy of Miller’s life: from her early childhood trauma to her stint as a Vogue model and art-world ingénue, from her harrowing years as a war correspondent to her unconventional marriages and passion for gourmet cooking. A lavishly illustrated story of art and beauty, sex and power, Modernism and Surrealism, Lee Miller illuminates an astonishing woman’s journey from art object to artist.
Carolyn Burke has taught at Princeton and the University of California at Santa Cruz, among other universities in France, the U.S., and Australia. She is the author of Becoming Modern: The Life of Mina Loy.
Finalist
— National Book Critics Circle Award

“Lee Miller went through life as a serial dazzler, adopting and shedding…guises a chameleon might envy.”

“If, like Auntie Mame, you believe that 'Life is a banquet and most poor suckers are starving to death,' you'll surely want to read Carolyn Burke's delightful biography of Lee Miller. . . . Delightful, meticulously researched, fascinating. . . . Miller’s life had many phases, all of them interesting, and Burke captures them in [this] fine biography.”
— Washington Post Book World

“Lee Miller was an astounding woman, brought memorably to life in this astounding book.”
— Telegraph (UK)

“At last, a life and an album about Lee Miller. . . . For the first time the ravaged arc of [her] life is clear, beautiful but lined in pain.”
— New York Observer

“Carolyn Burke's startling achievement is to document each persona with empathy and insight, to embed them all in time and place, and to weave the whole together into an absorbing narrative. . . . The result is an engrossing double portrait, a subtle analysis of two enigmas: Miller herself and the exhilarating and appalling century in which she lived.”
— Judith Rice

“Carolyn Burke’s biography of Lee Miller (1907–1977) stands out for its thoroughness and professionalism. . . . Burke is neither an art critic nor an expert in photography, but she does know how to enlist psychological insights as keys to her narrative.”
— Andy Grundberg

“Like Walt Whitman, Lee Miller contained multitudes. . . . Miller was an artist of merit with a life perhaps more interesting than her art. Carolyn Burke has given us a richly detailed, excellently written, and critically observed account of this life—one that deserves a superb biography and has gotten it. . . . [She] shows us that the largely forgotten Lee Miller is well worth remembering and judging.”
— Samuel McCracken

"No one who reads Burke's involving biography will ever forget Miller. So visually rich and electrifying is her story, a movie version seems inevitable. . . . Demonstrating the same clarity of observation and sensitivity to subtleties that distinguish Miller's photographs, Burke indelibly portrays a radiant woman forced to look into the heart of darkness, and an artist who cast light on a brutalized world, illuminating its abiding beauty and grace, and enhancing our empathy and awe."
— Donna Seaman

"[This] impeccably written and researched book is surely a state-of-the-art biogrpahy."
— Carl Rollyson