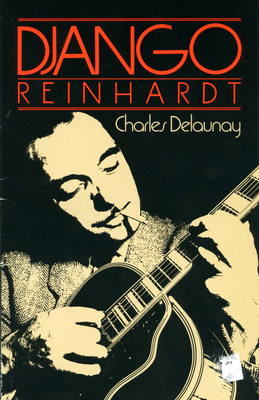 
Usually Ships in 1-5 Days
No European jazz musician has so enchanted the word as Django Reinhardt, the gypsy guitarist whose recording with Stephane Grappelly and the Hot Club of France have meant "The Thirties" to several generations of listeners, influencing musicians as far afield as Larry Coryell, Leon Redbone, Eddy Lang, and Charlie Christian.
This is the only full-length study of Django ever published in English, an unforgettable portrait of a wild and independent figure who never learned to read or write (friends forged his autographs), exasperated those people who lived by schedules, gambled away a week's salary in a night, but who played the guitar like no one before or since. The distinguished French critic Charles Delaunay, who knows more about Django than anyone alive, here provides not only the familiar outline of a life--the childhood travels in gypsy caravans, the fire that left Django with a crippled hand, the legendary temper and generosity--but he also collected scores of anecdotes about the sensitivity and musical gifts that were the basis for Django's appearance as a character in Jean Cocteau's Les Enfants Terribles. Who else but Django could charm his way out of a jail sentence by serenading the police officer with his guitar?
The comprehensive discography at the back of the book completes Delaunay's picture of this "misrepresented and fantastic creature, at once so captivating and so divorced from the contentions of his age."
Charles Delaunay (1911-1988) was a French author and jazz expert. He was a cofounder and long-term leader of the Hot Club de France.