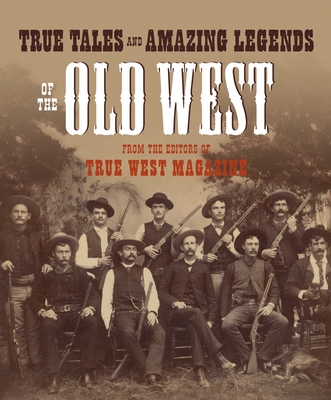 Much has been written about the west—most of it clouded by exaggeration and fabrication. Since 1953, True West magazine has been devoted to celebrating the West’s true colors, giving the men and women who settled there accurate voices, exploring every triumph and tragedy of their time—and exposing every vice and virtue.

True Tales and Amazing Legends of the Old West commemorates these unforgettable cowboys, Indians, and city slickers through a mix of classic histories and brand-new narratives, all illustrated with photographs—many reproduced here for the first time—of the people and places that gave rise to America’s Western mythology.

With twenty-six stories that blend fact with folklore, this collection abounds with accounts of the famous and the infamous, including Sacagawea, Wild Bill Hickok, Pancho Villa, Butch Cassidy and the Sundance Kid, Davy Crockett, and Wyatt Earp. Also here are lesser-known figures whose stories were pivotal to shaping the culture of the era, such as European conquistador Francisco Coronado, rancher “Black Billy” Hill, and fearless lawman Orlando “Rube” Robbins. Other tales recount the wide open plains, lawlessness, drama, mayhem, and promise embodied in the Old West.

Whether you’re a history buff, an Old West devotee, or simply someone who is fascinated by the characters of America’s early years, these timeless tales and photographs epitomize the legendary spirit of what it meant to settle the West.

Founded in 1953, True West magazine reaches more than 193,000 readers every issue. It is distributed throughout the United States, Canada, and Europe and has been critically acclaimed for its accurate portrayals of Old West legends.

This feature require that you enable JavaScript in your browser.
END_OF_DOCUMENT_TOKEN_TO_BE_REPLACED

This feature require that you enable JavaScript in your browser.
END_OF_DOCUMENT_TOKEN_TO_BE_REPLACED

This feature require that you enable JavaScript in your browser.
END_OF_DOCUMENT_TOKEN_TO_BE_REPLACED

This feature require that you enable JavaScript in your browser.
END_OF_DOCUMENT_TOKEN_TO_BE_REPLACED