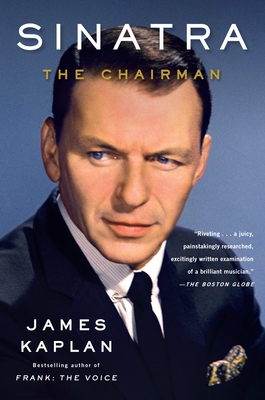 The story of Frank Sinatra’s second act, Sinatra finds the Chairman on top of the world, riding high after an Oscar victory—and firmly reestablished as the top recording artist of his day. Following Sinatra from the mid-1950s to his death in 1998, Kaplan uncovers the man behind the myth, revealing by turns the peerless singer, the (sometimes) powerful actor, the business mogul, the tireless lover, and—of course—the close associate of the powerful and infamous. It was in these decades that the enduring legacy of Frank Sinatra was forged, and Kaplan vividly captures “Ol’ Blue Eyes” in his later years. The sequel to the New York Times best-selling Frank, here is the concluding volume of the definitive biography of "The Entertainer of the Century."
James Kaplan has been writing about people and ideas in business and popular culture, as well as notable fiction (The Best American Short Stories), for more than three decades. His essays and reviews, as well as more than a hundred major profiles, have appeared in many magazines, including The New Yorker, the New York Times Magazine, Vanity Fair, Esquire, and New York. His novels include Pearl’s Progress and Two Guys from Verona, a New York Times Notable Book for 1998. His nonfiction works include The Airport, You Cannot Be Serious (coauthored with John McEnroe), Dean & Me: A Love Story (with Jerry Lewis), and the first volume of his definitive biography of Frank Sinatra, Frank: The Voice. He lives in Westchester, New York, with his wife and three sons.
“Riveting . . . a juicy, painstakingly researched, excitingly written examination of a brilliant musician.” —The Boston Globe

“Engaging to the point of addiction. . . . [Kaplan] paints a full portrait of an extremely talented and equally difficult artist. The Sinatra that emerges from these pages is an outsized figure who’s never less or more than brutally human.” —The Dallas Morning News

“Toward the end of . . . James Kaplan’s magisterial biography of Frank Sinatra, I guarantee you’ll begin to weep over the death of a massive and unforgettable talent whose style of living helped define postwar America and for an America that no longer exists.” —The Washington Post

“The Chairman never neglects the fact that beneath the fisticuffs and tabloid scandals Frank Sinatra was first and foremost an artist, as soulful and committed an original as this country will ever produce.” —Vanity Fair

“Meticulously researched. . . . Kaplan draws from previous biographies and the memoirs of Sinatra’s lovers and fellow travellers, but the pithy narrative is his own, as are his persuasive critiques of the music.” —The Guardian

“[Kaplan uses] detail the way a novelist does—and weaves Sinatra in with the era he lived through.” —Salon

“What sets both Kaplan volumes apart from other Sinatra biographies is the author’s . . . exhaustive detail of the Chairman’s single-minded passion for making the most of his gift.” —The Washington Times

“[Kaplan does a] nimble job of tracing the singer’s continued rise to international fame, and credibly explicates the alchemy behind the singer’s collaboration with Nelson Riddle and their amazing achievement during the Capitol Records years.” —The New York Times

“Hugely compelling. . . . Stunningly researched. . . . No one is ever likely more trustworthy about Sinatra than Kaplan.” —The Buffalo News

“Kaplan’s two volume set is the definitive word on Frank Sinatra, as definitive as any biography of any public figure can be. It’s jammed with something juicy on almost every page. It has been written with integrity and affection.” —Liz Smith

“Remarkably insightful, gracefully, often eloquently written. . . . [Kaplan is] as astute in his psychological analysis as in his music criticism.” —Booklist (starred)