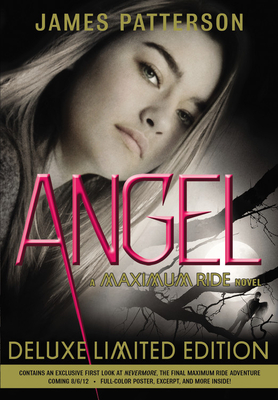 This is book number 7 in the Maximum Ride series.

Max Ride and her best friends are up against a deadly force, but Fang is gone just when they need him most. Will they be ready for the ultimate showdown?
Max Ride and her best friends have always had one another's backs-no matter what. Living on the edge as fugitives, they never had a choice. But now they're up against a deadly force that's racing across the globe, and just when they need him the most, Fang is gone. He's creating his own gang that will replace everyone-including Max.
Max is heartbroken over losing Fang, her soul mate. Her closest friend. But with Dylan ready and willing to fight by her side, and she can no longer deny that his incredible intensity draws her in. Max, Dylan, and the rest of their friends must soon join forces with Fang and his new gang for an explosive showdown in Paris that's unlike anything you've ever imagined . . . or read.
For his prodigious imagination and championship of literacy in America, James Patterson was awarded the 2019 National Humanities Medal, and he has also received the Literarian Award for Outstanding Service to the American Literary Community from the National Book Foundation. He holds the Guinness World Record for the most #1 New York Times bestsellers, including Confessions of a Murder Suspect and the Maximum Ride and Witch & Wizard series, and his books have sold more than 400 million copies worldwide.

A tireless champion of the power of books and reading, Patterson created a children’s book imprint, JIMMY Patterson, whose mission is simple: “We want every kid who finishes a JIMMY book to say, ‘PLEASE GIVE ME ANOTHER BOOK.’” He has donated more than three million books to students and soldiers and funds over four hundred Teacher and Writer Education Scholarships at twenty-one colleges and universities. He also supports 40,000 school libraries and has donated millions of dollars to independent bookstores. Patterson invests proceeds from the sales of JIMMY Patterson Books in pro-reading initiatives.

"A strong installment in the series...full of...many fantastic flying descriptions that will make readers wish they had wings."
—Chicago Sun-Times

Praise for Fang:
"Patterson has created another thrilling adventure that is sure to capture readers' imaginations.... [His] quick-paced tale of adventure, betrayal, and redemption is full of vibrant and memorable characters. It truly has bit."—School Library Jouranl

"This will excite legions of fans waiting for this installment in the flock's story."—Booklist

"[B]reathtaking... Maximum Ride fans will not be disappointed in 'Fang.' The high-flying plot and new twists leave the reader begging for more of Max and the flock."—Burlington-Times News