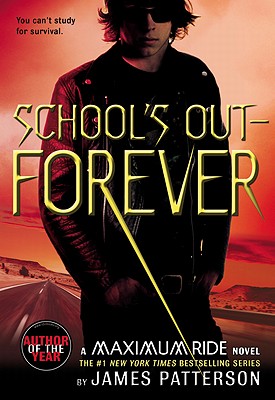 This is book number 2 in the Maximum Ride series.

Fourteen-year-old Maximum Ride and the other members of the "Flock" -- Fang, Iggy, Nudge, Gasman and Angel -- are just like ordinary kids -- only they have wings and can fly.
After their last wild adventure, the Flock members are taken under the wing of an FBI agent and try to live "normal" lives by going to school, making friends -- and continuing their relentless search for their parents. But the Erasers return, forcing the Flock to abandon their search and make their escape once again. The voice inside Max's head keeps telling her that it's up to her to save the world, but this is especially challenging to do when she is faced with her ultimate match: a newer and better version of herself, Maximum Ride II. Max's heart-stopping quest to investigate the mind-blowing mystery of her ultimate destiny continues in the scariest, strangest, and funniest James Patterson novel yet.
James Patterson has had more New York Times bestsellers than any other writer, ever, according to Guinness World Records. Since his first novel won the Edgar Award in 1977 James Patterson's books have sold more than 300 million copies. He is the author of the Alex Cross novels, the most popular detective series of the past twenty-five years, including Kiss the Girls and Along Came a Spider. He writes full-time and lives in Florida with his family.

*"A breathless adventure...full of action, swooping flights and fierce fights--a sure bet for the movies." (Starred Review)--Kliatt

"Adventure, fighting, backstabbing, and love abound throughout the book, while still allotting time to develop characters one cares about."--VOYA

"Readers are in for another exciting wild ride."--Kirkus