What Happens Next (Paperback) 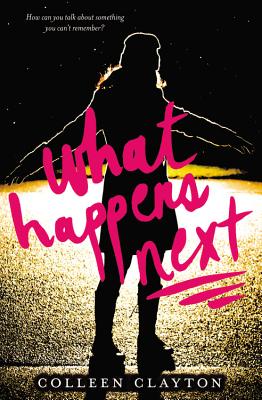 What Happens Next (Paperback)


Usually Ships in 1-5 Days
How can you talk about something that you can't remember?
Before the ski trip, Cassidy "Sid" Murphy was a cheerleader (on the bottom of the pyramid, but still...) and a straight-A student, with two of the best friends a girl could ask for.
When Sid finds herself on a ski lift with hunky local college guy, Dax Windsor, she's thrilled. "Come to a party with me," he tells her, but Dax isn't what he seems. He takes everything from Sid-including a lock of her perfect red curls--and she can't remember any of it.
After the ski trip, Sid is an insomniac and an obsessive late-night runner, unable to relate to her old friends.
Caught in a downward spiral, Sid drops her college prep classes and takes up residence in the A/V room with only Corey "The Living Stoner" Livingston for company. But as she gets to know Corey--slacker, baker, total dreamboat--Sid finds someone who truly makes her happy. Now, if only she could shake the nightmares, everything would be perfect...
Witty and poignant, Colleen Clayton's debut is a stunning story of moving on after the unthinkable happens
Like Sid, Colleen Clayton grew up in the suburbs just outside of Cleveland, Ohio. After graduating from Kent State University, she worked as a social worker for over a decade in residential treatment centers for troubled teens and as program supervisor for Big Brothers Big Sisters of Mahoning Valley. She currently lives Ohio with her family and recently received her MFA from the Northeast Ohio Consortium at Youngstown State University. Colleen invites you to visit her online at www.colleenclayton.com. What Happens Next is her debut novel.
* "Equal parts endearing spunk and heartbreaking vulnerability, Sid Murphy is a character who feels more like family by story's end. The story-and even more importantly, Sid herself-will stay with readers long after the final page is turned. Kudos to Clayton for crafting a powerful, moving debut."—Kirkus (starred review)

"Girls will see themselves or someone they know in this thought-provoking story as it gets passed from friend to friend."—SLJ

"Real teenagers. Real issues. Real writing...Heartbreaking, but still filled with hope and promise, author Colleen Clayton knows that the past can't be rewritten, but you can ruin the future by not learning from it."—Holly Goldberg Sloan, author of I'll Be There

"Sad, funny, and true, this book hits all the right notes"—Miranda Kenneally, author of Catching Jordan and Stealing Parker