The Subtle Body: The Story of Yoga in America (Paperback) 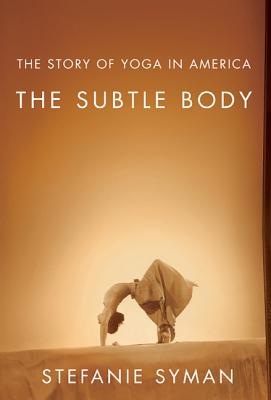 In The Subtle Body, Stefanie Syman tells the surprising story of yoga's transformation from a centuries-old spiritual discipline to a multibillion-dollar American industry.

Yoga's history in America is longer and richer than even its most devoted practitioners realize. It was present in Emerson's New England, and by the turn of the twentieth century it was fashionable among the leisure class. And yet when Americans first learned about yoga, what they learned was that it was a dangerous, alien practice that would corrupt body and soul.

A century later, you can find yoga in gyms, malls, and even hospitals, and the arrival of a yoga studio in a neighborhood is a signal of cosmopolitanism. How did it happen? It did so, Stefanie Syman explains, through a succession of charismatic yoga teachers, who risked charges of charlatanism as they promoted yoga in America, and through generations of yoga students, who were deemed unbalanced or even insane for their efforts. The Subtle Body tells the stories of these people, including Henry David Thoreau, Pierre A. Bernard, Margaret Woodrow Wilson, Christopher Isherwood, Sally Kempton, and Indra Devi.

From New England, the book moves to New York City and its new suburbs between the wars, to colonial India, to postwar Los Angeles, to Haight-Ashbury in its heyday, and back to New York City post-9/11. In vivid chapters, it takes in celebrities from Gloria Swanson and George Harrison to Christy Turlington and Madonna. And it offers a fresh view of American society, showing how a seemingly arcane and foreign practice is as deeply rooted here as baseball or ballet.

This epic account of yoga's rise is absorbing and often inspiring—a major contribution to our understanding of our society.

Stefanie Syman, a literature graduate of Yale, was a founder of Feed, an early, award-winning Web magazine. She has written for The Wall Street Journal, Rolling Stone, Vogue, and Yoga Journal. A native of Los Angeles, she lives in Park Slope, Brooklyn, and has practiced yoga for fifteen years. She is the author of The Subtle Body.

“Stefanie Syman's . . . spacious history of yoga in America, The Subtle Body, begins by describing how deeply and enduringly classical Indian philosophy influenced American transcendentalists. Both Emerson and Thoreau admired the Bhagavad-Gita . . . However, neither knew much about the physical-fitness side of yoga. The earliest Indian vendors of spirituality, like Swami Vivekananda . . . looked down on the asanas, or poses, of hatha yoga as a defective path to yoga's goal: the union of the individual self with the divine Self.” —PANKAJ MISHRA, The New York Times Book Review

“Syman . . . astutely shows how yoga's versatility as a practice has helped it adapt to ever-conflicting historical currents.” —CLAIRE DEDERER, Slate

“Syman gives a terrific overview of the teachers whose names are now so much a part of the history of yoga in this country: Vivekananda, Sri Aurobindo, Prabhavananda, Indra Devi, Jois and Bikram . . . As for charges of commercialism or elitism: ‘Yoga is both an indulgence and a penance,' she writes. ‘It will tone your thighs, and it might crack open your reality.'” —SUSAN SALTER REYNOLDS, Los Angeles Times

“Many of us have been waiting for decades to read a comprehensive history of yoga in the United States. Stefanie Syman has written that history and she has written it very well. I recommend this book to the 16 million people who practice yoga in this country, as well as to anyone who simply wonders what the fuss is all about.” —David Gordon White, author of Sinister Yogis

“The Subtle Body is an enthralling book, and an enlightening one.” —Robert Thurman

“Stefanie Syman's superb book fills a major gap in our understanding of religion in America. This fascinating account, full of colorful characters, demonstrates the importance of yoga in transforming Americans' understanding of the body. Any survey of American religious history must take this narrative into account.” —Randall Balmer, Professor of American Religious History, Barnard College, Columbia University

“As this intriguing narrative chronicles, few points of dynamic transfer in the encounter between East and West have proven more useful to creative Americans than the ancient philosophy and exercise regime of yoga. For its many practitioners, yoga fuses body, mind, spirit, energy, and attitude into an alembic of well-being harmonizing self and non-self, struggle and peace.” —Kevin Starr, University of Southern California

This feature require that you enable JavaScript in your browser.
END_OF_DOCUMENT_TOKEN_TO_BE_REPLACED

This feature require that you enable JavaScript in your browser.
END_OF_DOCUMENT_TOKEN_TO_BE_REPLACED

This feature require that you enable JavaScript in your browser.
END_OF_DOCUMENT_TOKEN_TO_BE_REPLACED

This feature require that you enable JavaScript in your browser.
END_OF_DOCUMENT_TOKEN_TO_BE_REPLACED