The Rule of Saint Augustine (Paperback) 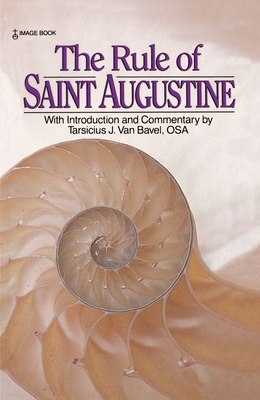 The Rule of Saint Augustine (Paperback)

A giant of the faith, St. Augustine is well known as "the restless searcher for truth." His life and the Rule he formulated have had enduring influence on the Christian ideal of the religious life. This is a new, modern English translation of the Rule from the original critical Latin text. An extensive Commentary elucidates its meaning and its relevance to those who follow or study it today.

Augustine's concise spiritual directions, based heavily on the Scriptures, cover such subjects as prayer, love and community, mutual responsibility, service, authority and obedience. He outlines the basics for exercising genuine love, the goal of all things -- indeed life itself. This brief but classic guide is as inspiring and applicable to the twentieth century as it was to Augustine's early followers. It clearly reflects his own vision and spiritual depth. As Van Bavel observes in his Introduction: "We could characterize the Rule of Augustine as a call to the evangelical equality of all people. It voices the Christian demand to bring all men and women into full community."

The Rule of St. Augustine is, indeed, a Rule for all Christians -- religious and laity alike.
Saint Augustine was one of those towering figures who so dominated his age that the age itself bears his name. The Age of Augustine was a time of transition, and Augustine was a genius of such stature that, according to Christopher Dawson, "he was, to a far greater degree than any emperor or general or barbarian warlord, a maker of history and a builder of the bridge which was to lead him from the old world to the new."  He was the ablest religious thinker and controversialist at a period when theological controversy reached a level of intellectual refinement never achieved before or since. He was a tireless preacher and he wrote 118 treatises, including the most famous spiritual autobiography of all time, The Confessions. Of all these works, the one most prized by Augustine was his City of God, a veritable encyclopedia of information on the lives, thoughts and aspirations of ancient and early Christian man.