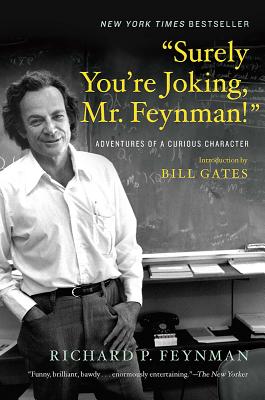 One of the most famous science books of our time, the phenomenal national bestseller that "buzzes with energy, anecdote and life. It almost makes you want to become a physicist" (Science Digest).

Richard P. Feynman, winner of the Nobel Prize in physics, thrived on outrageous adventures. In this lively work that “can shatter the stereotype of the stuffy scientist” (Detroit Free Press), Feynman recounts his experiences trading ideas on atomic physics with Einstein and cracking the uncrackable safes guarding the most deeply held nuclear secrets—and much more of an eyebrow-raising nature. In his stories, Feynman’s life shines through in all its eccentric glory—a combustible mixture of high intelligence, unlimited curiosity, and raging chutzpah.

Included for this edition is a new introduction by Bill Gates.

Richard P. Feynman (1918–1988) was a professor at Cornell University and CalTech and received the Nobel Prize for physics in 1965. In 1986 he served with distinction on the Rogers Commission investigating the space shuttle Challenger disaster.

Ralph Leighton lives in northern California.
A storyteller in the tradition of Mark Twain. Feynman proves once again that it is possible to laugh out loud and scratch your head at the same time.
— K. C. Cole - New York Times Book Review

Books like this are temptations—to give up reading and devote life to rereading…The book is a litmus paper: anyone who can read it without laughing out loud is bad crazy.
— Los Angeles Times Book Review

A chain reaction is not a bad analogy for Feynman’s life. From a critical mass of gray matter it goes off in all directions, producing both heat and light.
— Time

Feynman is legendary among his colleagues for his brilliance and his eccentricity…It’s not hard to smile all the way through.
— Newsweek