The Eye Of The Elephant: An Epic Adventure in the African Wilderness (Paperback) 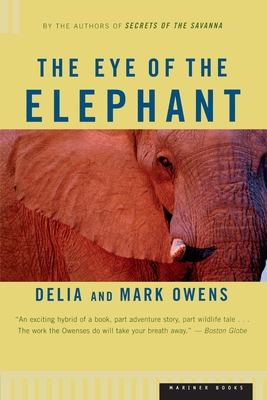 The Eye Of The Elephant: An Epic Adventure in the African Wilderness (Paperback)

Intelligent, majestic, and loyal, with lifespans matching our own, elephants are among the greatest of the wonders gracing the African wilds. Yet, in the 1970s and 1980s, about a thousand of these captivating creatures were slaughtered in Zambia each year, killed for their valuable ivory tusks. When biologists Mark and Delia Owens, residing in Africa to study lions, found themselves in the middle of a poaching fray, they took the only side they morally could: that of the elephants.

The Eye of the Elephant recounts the Owens’ struggle to save these innocent animals from decimation, a journey not only to supply the natives with ways of supporting their villages, but also to cultivate support around the globe for the protection of elephants. Filled with daring exploits among disgruntled hunters, arduous labor on the African plains, and vivid depictions of various wildlife, this remarkable tale is at once an adventure story, a travelogue, a preservationist call to action, and a fascinating examination of both human and animal nature.
When Mark and Delia Owens first went to Africa in 1974, they bought a thirdhand Land Rover, drove deep into the Kalahari Desert, and lived there for seven years. They are the authors of Cry of the Kalahari, an international bestseller and winner of the John Burroughs Medal, The Eye of the Elephant, and Secrets of the Savanna. After more than 30 years in Africa, they returned to the United States to carry on their conservation work.

DELIA OWENS is the author of the bestselling Where the Crawdads Sing, her first novel, and the coauthor of three internationally bestselling nonfiction books about her life as a wildlife scientist in Africa: Cry of the Kalahari, The Eye of theElephant, and Secrets of the Savanna. She has won the John Burroughs Award for Nature Writing and has been published in Nature, African Journal of Ecology, and International Wildlife, among many others. She lives in Idaho, where she continues her support for the people and wildlife of Zambia.