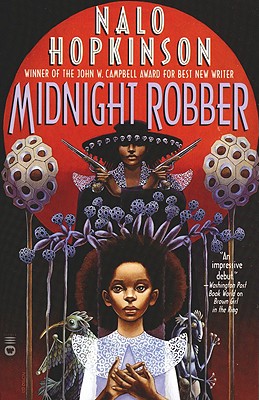 
Usually Ships in 1-5 Days
A "[d]eeply satisfying" [The New York Times Book Review] story of a father who has committed an unbelievable crime and a daughter who must then fight to save her own life.

It's Carnival time and the Caribbean-colonized planet of Toussaint is celebrating with music, dance, and pageantry. Masked "Midnight Robbers" waylay revelers with brandished weapons and spellbinding words. To young Tan-Tan, the Robber Queen is simply a favorite costume to wear at the festival--until her power-corrupted father commits an unforgiveable crime.

Suddenly, both father and daughter are thrust into the brutal world of New Half-Way Tree. Here monstrous creatures from folklore are real, and the humans are violent outcasts in the wilds. Tan-Tan must reach into the heart of myth and become the Robber Queen herself. For only the Robber Queen's legendary powers can save her life . . . and set her free.
Nalo Hopkinson was born in Jamaica and has lived in Guyana, Trinidad, and Canada. The daughter of a poet/playwright and a library technician, she has won numerous awards including the John W. Campbell Award, the World Fantasy Award, and Canada's Sunburst Award for literature of the fantastic. Her award-winning short fiction collection Skin Folk was selected for the 2002 New York Times Summer Reading List and was one of the New York Times Best Books of the Year. Hopkinson is also the author of The New Moon's Arms, The Salt Roads, Midnight Robber, and Brown Girl in the Ring. She is a professor of creative writing at the University of California, Riverside, and splits her time between California, USA, and Toronto, Canada.
"Deeply satisfying...succeeds on a grand scale...best of all is the
language....Hopkinson's narrative voice has a way of getting under the
skin."—The New York Times Book Review

"Spicy and distinctive, set forth in a thoroughly captivating Caribbean dialect."—Kirkus Reviews

"...employs Caribbean folk elements to tell a story that is by turns fantastic, allegorical and contemporary."—Washington Post