Walking on the Moon: The Untold Story of the Police and the Rise of New Wave Rock (Hardcover) 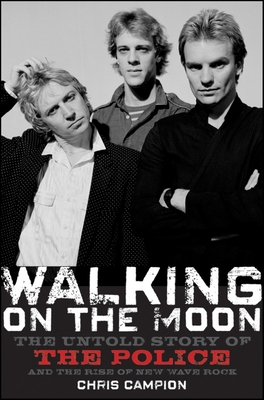 Walking on the Moon: The Untold Story of the Police and the Rise of New Wave Rock (Hardcover)

The Police have sold more than 50 million albums, made Rolling Stone's Greatest Artists of All Time list, and finished a triumphant world reunion tour in 2008.

Now British journalist Chris Campion draws on extensive research and new interviews to trace the inside saga of this iconic group, including the unorthodox business strategies employed by manager Miles Copeland that took them to the top and the intense rivalry that drove Sting, Andy Summers, and Stewart Copeland to split at the height of their success in the 1980s.

Whether you've been a fan of The Police for decades or are discovering their music for the first time, Walking on the Moon will give you new insights into the personalities behind this unique band and their role in the rise of 80s New Wave rock.

Chris Campion has reported on the world of popular culture- from its center to the extreme edges- for over fifteen years for British publications such as the "Observer," the "Daily Telegraph," and "Bizarre" magazine. A former contributing editor to the "Dazed & Confused" and "Vice" magazines, he has interviewed superstars, cultural nomads, vagabonds, and outcasts and has reported on subjects as varied as the Norwegian black metal scene, Japanese girl groups, a long-disputed death penalty case in Arkansas, the complicated public life of a celebrity British glamour model, and the cult of personality surrounding a controversial German anatomist.