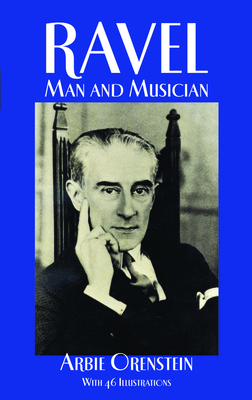 
Usually Ships in 1-5 Days
Ravel: Man and Musician is the first book to set the composer's entire oeuvre in its proper perspective ... a staggeringly well documented opus ... it cannot be matched for the invaluable particulars it provides. -- Patrick J. Smith, Editor, High Fidelity/Musical America
The music of Maurice Ravel is performed more today than that of any other French composer. His musical achievements as well as his life and times are brilliantly recreated in this masterly biography, originally published during Ravel's centenary year of 1975. Written by Arbie Orenstein, widely considered the world's foremost Ravel scholar, this book remains the standard biography -- detailed, alert to the historical milieu and cultural background of Ravel's music, rich in quotations drawn from his letters and filled with information gathered in the author's many interviews with the composer's friends.
Mr. Orenstein provides an illuminating analysis of each of Ravel's works -- including several compositions, autographs, and sketches brought to light through the author's exhaustive research -- and a general discussion of Ravel's musical aesthetics and language. He includes as well 32 plates of illustrations and two invaluable appendixes: a complete catalogue of Ravel's works, and a discography of historical recordings made between 1912 and 1939.
Highly recommended ... a worthy centenary tribute to both Ravel and his musical legacy. -- Choice
If the concert-goer is looking for the one book on Ravel that would serve him best, this is probably it. -- Intermezzo