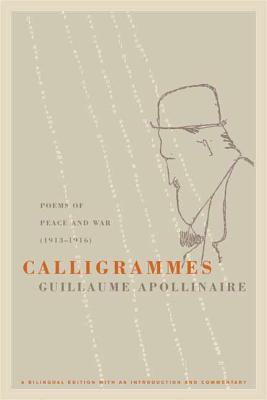 By Guillaume Apollinaire, Anne Hyde Greet (Translated by), S. I. Lockerbie (Introduction by)
$48.93

This fully annotated bilingual edition of Calligrammes makes available a key work not only in Apollinaire's own development but also in the evolution of modern French poetry. Apollinaire—Roman by birth, Polish by name (Wilhelm-Apollinaris de Kostrowitski), Parisian by choice—died at thirty-eight in 1918. Nevertheless, he became one of the leading figures in twentieth-century poetry, a transitional figure whose work at once echoes the Symbolists and anticipates the work of the Surrealists.

"Greet's English is an excellent guide to Apollinaire's French. A modern classic long overdue in this form."
— Los Angeles Times

“What we have in these poems, instead of politics, is a subjective and affective chronicle in which the wilder imaginative flights are constantly pinned down by immediate detail. A consistent governing sensibility expands then retracts with impressive suppleness - it's rather like a genie returning to its bottle.”
— The Guardian

"This impressive edition presenting the original French texts facing the English translations deserves high praise on numerous counts. The successful duplication in English of the complex typography of these word-drawings is in itself a feat. . . . The enduring value of this edition will derive from its completeness and the tools it offers the competent but inexpert reader of French for fuller understanding of Apollinaire's rich, but often abstruse vocabulary and imagery."
— CHOICE

"The reader new to Apollinaire will be led into the fascinating labyrinth, the specialist will find it both stimulating and invaluable as a work of reference. . . . This is an authoritative and complete edition and will remain so for a long time to come."
— Modern Language Review

"Any study, any appreciation, not only of French poetry early in [the 20th] century but of French painting—Picasso, the Cubists, Delaunay—and of Apollinaire's personal vision can begin with this excellent book."
— The Antioch Review

This feature require that you enable JavaScript in your browser.
END_OF_DOCUMENT_TOKEN_TO_BE_REPLACED

This feature require that you enable JavaScript in your browser.
END_OF_DOCUMENT_TOKEN_TO_BE_REPLACED

This feature require that you enable JavaScript in your browser.
END_OF_DOCUMENT_TOKEN_TO_BE_REPLACED

This feature require that you enable JavaScript in your browser.
END_OF_DOCUMENT_TOKEN_TO_BE_REPLACED