Assassination of a Saint: The Plot to Murder Óscar Romero and the Quest to Bring His Killers to Justice (Paperback) 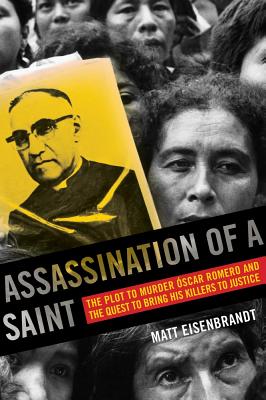 Assassination of a Saint: The Plot to Murder Óscar Romero and the Quest to Bring His Killers to Justice (Paperback)


Usually Ships in 1-5 Days
"A tale told well that provides valuable insights into the motives and modus operandi of the death squads in El Salvador, and of the financiers who commissioned and facilitated such crimes. It also highlights the difficulties that face those who pursue such cases many years after the crimes have taken place."—New York Review of Books On March 24, 1980, the assassination of El Salvador’s Archbishop Óscar Romero rocked that nation and the world. Despite the efforts of many in El Salvador and beyond, those responsible for Romero’s murder remained unpunished for their heinous crime. Assassination of a Saint is the thrilling story of an international team of lawyers, private investigators, and human-rights experts that fought to bring justice for the slain hero. Matt Eisenbrandt, a lawyer who was part of the investigative team, recounts in this gripping narrative how he and his colleagues interviewed eyewitnesses and former members of death squads while searching for evidence on those who financed them. As investigators worked toward the only court verdict ever reached for the murder of the martyred archbishop, they uncovered information with profound implications for El Salvador and the United States.

Matt Eisenbrandt is a U.S-trained human-rights attorney who has devoted his career to finding legal means to prosecute war crimes. In the early 2000s, he served as the Center for Justice and Accountability’s Legal Director and a member of the trial team against one of Óscar Romero’s killers. Now based in Canada, Matt is a special consultant to Camp Fiorante Matthews Mogerman on the law firm’s business and human rights cases. He is also a special advisor to the Canadian Centre for International Justice, where he previously served as Legal Director.

"Our Favorite Books of 2016: Part detective story, part historical reminiscence, it shows the reader how hard it is to prosecute such cases, and why so many human rights violators go unpunished."
— The Progressive

"Fast paced, informative and dramatic. . . . Imagine a report from Amnesty International written by Graham Greene and John LeCarre in tandem and you will have a sense of Eisenbrandt’s exciting and well-written achievement."
— Vancouver Sun

"A tale told well that provides valuable insights into the motives and modus operandi of the death squads in El Salvador, and of the financiers who commissioned and facilitated such crimes. It also highlights the difficulties that face those who pursue such cases many years after the crimes have taken place."
— New York Review of Books

"Assassination begins like a crime thriller, complete with a criminal manhunt, before transitioning into a courtroom drama. Ultimately, however, the book’s lasting value is as a work of history."
— America

"Eisenbrandt's book is rich in depth and form . . . This book is specially relevant today."
— FactUm

"For persons familiar with El Salvador’s painful modern-day history, Matt Eisenbrandt’s Assassination of a Saint: The Plot to Murder Oscar Romero and the Quest to Bring His Killers to Justice connects dots, fills in holes and provides a frontline account of the battle to bring accountability to those who plotted and carried out Blessed Archbishop Oscar Romero’s murder. For those who know the martyr mostly by name and reputation, the 250 pages are a primer on the man and his ministry, as well as a remarkable synthesis of the passions, politics and players at work in El Salvador’s brutal last half century."

"It has taken Matt Eisenbrandt a decade to write this beautifully crafted volume, but it was well worth waiting for."
— The Catholic Herald

"Eisenbrandt is the first to craft a detailed narrative of the plan to murder Romero and ensuing efforts to bring the perpetrators to justice."
— TeleSur

“ A remarkable achievement. . . . A must-read for anyone interested in recent Salvadoran history, the life and witness of Óscar Romero, the Catholic Church in Latin America, or the challenge of defending human rights in our world. . . . Assassination of a Saint reads like an engrossing detective story.”
— Reading Religion