I am John Lewis (Ordinary People Change the World) (Hardcover) 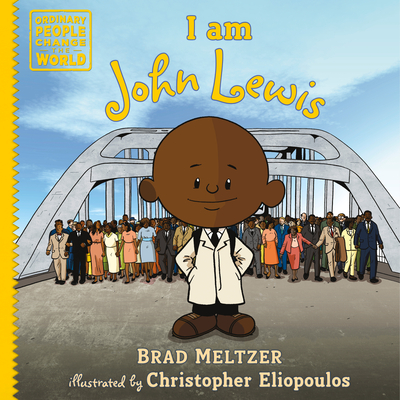 I am John Lewis (Ordinary People Change the World) (Hardcover)

This book spotlights John Lewis, known for his role in the Civil Rights Movement, having helped organize the March on Washington and the Selma Voting Rights March, and for his lifelong dedication to public service as a member of the House of Representatives. John Lewis was never afraid to get in good trouble This friendly, fun biography series inspired the PBS Kids TV show Xavier Riddle and the Secret Museum. One great role model at a time, these books encourage kids to dream big. Included in each book are:   • A timeline of key events in the hero’s history   • Photos that bring the story more fully to life   • Comic-book-style illustrations that are irresistibly adorable   • Childhood moments that influenced the hero   • Facts that make great conversation-starters   • A virtue this person embodies: John Lewis's resolve to fight for a better world is celebrated in this titleYou’ll want to collect each book in this dynamic, informative series!
Brad Meltzer is the New York Times bestselling author of Heroes for My Son, Heroes for My Daughter, The Lincoln Conspiracy, and a number of suspense novels like The Lightning Rod. He also helped find the missing 9/11 flag with his is History Channel television show Brad Meltzer's Lost History. He lives in Florida with his wife and their three children.

Christopher Eliopoulos began his illustration career at Marvel Comics, and has worked on thousands of comics, including the graphic novels Cosmic Commandos and Monster Mayhem. He is the author/illustrator of the picture books The Yawns Are Coming! and The Giggles Are Coming! He lives in New Jersey with his wife and their identical twin sons (when the boys are home from college).