The Enchanted Bridge (Dragons in a Bag #4) (Hardcover) 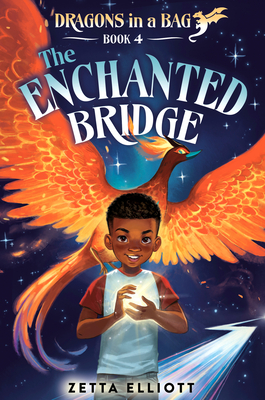 The Enchanted Bridge (Dragons in a Bag #4) (Hardcover)

This is book number 4 in the Dragons in a Bag series.

Getting three baby dragons back home was just the beginning. Now Jaxon is on a mission to help all magical creatures from Dragons in a Bag! But things in the magical realm are more complicated than they seem in the fourth book in the critically acclaimed series.

With their new special abilities, Jaxon and his friends are not the ordinary kids they used to be. No longer destined to become a witch, Jax finds himself caught up in a secret plan involving the Guardian of Palmara’s mysterious twin brother, Ol-Korrok. As the ambassador to the realm of magic, Jax must convince Sis that magical creatures should be free to return to the human world.

But to reach Palmara, Jax and his friends must cross Ol-Korrok’s enchanted bridge connecting the two realms. Is Ol-Korrok really the ally he pretends to be? Or has Jax set in motion a plan that will endanger both realms?

It takes strength to build a bridge. But sometimes even the strongest bridges must be burned.
Zetta Elliott was born in Canada and moved to the United States in 1994. She is the author of over twenty-five books for young readers, including the Dragons in a Bag series and the award-winning picture books Bird and Melena's Jubilee. She is also a contributor to the anthology We Rise, We Resist, We Raise Our Voices. Elliott is an advocate for greater diversity and equity in publishing. A longtime resident of Brooklyn, she currently lives in Chicago. Visit zettaelliott.com or follow her on Twitter @zettaelliott and Facebook: Author Zetta Elliott.

Cherise Harris spent much of her childhood in Barbados writing stories and making art. She went on to complete an associate's degree in Visual Arts at the Barbados Community College, a BFA in Illustration at the School of Visual Arts in NYC, and a master's in Illustration: Authorial Practice at Falmouth University in the UK. She now lives in Barbados with her husband and toddler daughter.