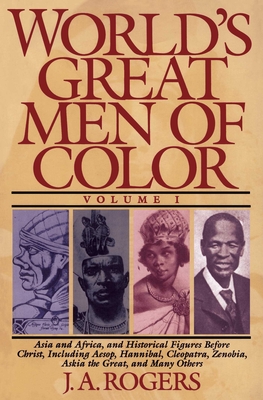 
Usually Ships in 1-5 Days
The classic, definitive title on the great Black figures in world history, beginning in antiquity and reaching into the modern age.

World’s Great Men of Color is the comprehensive guide to the most noteworthy Black personalities in world history and their significance. J.A. Rogers spent the majority of his lifetime pioneering the field of Black studies with his exhaustive research on the major names in Black history whose contributions or even very existence have been glossed over. Well-written and informative, World’s Great Men of Color is an enlightening and important historical work.
J.A. Rogers was an anthropologist and historian whose pioneering work in Black Studies was little appreciated during his lifetime. Among his many books are Superman to Man and Sex and Race. World's Great Men of Color was completed in 1947 but was published only in a small private edition. This edition has been brought up to date with an introduction, commentaries, and bibliographical notes by John Henrik Clarke, editor of Malcolm X: The Man and His Times and Harlem, U.S.A.
William Loren Katz Author of Eyewitness J.A. Rogers's anthropological and historical research and careful documentation sought to rescue his people from the humiliations of white scholarly mythology. Rogers's classic World's Great Men of Color has added vital pages to what has become known as Black Studies.