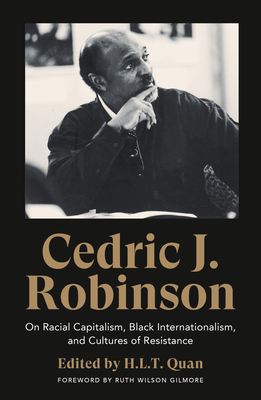 
Usually Ships in 1-5 Days
Cedric J. Robinson is considered one of the doyens of Black Studies and a pioneer in study of the Black Radical Tradition. His works have been essential texts, deconstructing racial capitalism and inspiring insurgent movements from Ferguson to the West Bank.

For the first time, Robinson's essays come together, spanning over four decades and reflective of his diverse interests in the interconnections between culture and politics, radical social theory and classic and modern political philosophy. Themes explored include Africa and Black internationalism, World politics, race and US Foreign Policy, representations of blackness in popular culture, and reflections on popular resistance to racial capitalism, white supremacy and more.

Accompanied by an introduction by H. L. T. Quan and a foreword by Ruth Wilson Gilmore, this collection, which includes previously unpublished materials, extends the many contributions by a giant in Black radical thought.

Ruth Wilson Gilmore is Professor of Geography at the Graduate Center of the City University of New York and the associate director of the Center for Place, Culture and Politics. She is the author of Golden Gulag: Prisons, Surplus, Crisis, and Opposition in Globalizing California, and has served as the chair of the American Studies Association and received the 'Angela Davis Award for Public Scholarship'.

'Before the movement for black lives made black radicalism cool for millennials, Cedric Robinson did the work of excavating an intellectual history we rely upon today'
The Root

'Like W. E. B. Du Bois, Michel Foucault, Sylvia Wynter, and Edward Said, Robinson was that rare polymath capable of seeing the whole - its genesis as well as its possible future. No discipline could contain him. No geography or era was beyond his reach.... He left behind a body of work to which we must return constantly and urgently'
Robin D. G. Kelley, author of 'Freedom Dreams: The Black Radical Imagination'