Palaces of Power: The Birth and Evolution of London's Clubland (Hardcover) 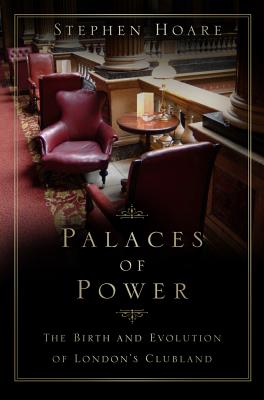 By Stephen Hoare
Email or call for price
Out of Print

London's Clubland charts the evolution of St James's by exploring the social and cultural history of the city's most prestigious district, and explores the tensions between the world of privilege and an emerging public realm over three centuries. The core of what we call St James’s dates from the late seventeenth century, when large estates were leased by the Crown to the landed gentry after the Restoration of the monarchy in 1660. St James’s clubs, coffee houses and institutions were shaped by political conflicts between Whig and Tory, and between the Jacobite supporters seeking to revive a Stuart monarchy following the protestant Hanoverian succession. Clubland’s institutions echo the conflicts of the Napoleonic wars and the rise of dandyism, gambling, and prostitution. By the Victorian era, St James’s represented Britain’s emerging role as an Imperial power. This sparked the rise of a new cosmopolitan middle class for whom St James’s became a luxury shopping destination, offering a decadent West End nightlife, complete with an array of now-famous clubs, the history of which appear in these pages.

Stephen Hoare has been a freelance writer and journalist for 20 years, writing on higher education, business schools, and the public sector for the Guardian. He is a regular contributor to the Times’ special reports, and is an author with a string of nonfiction titles to his name, including The Assassination of John F. Kennedy and Hiroshima.

This feature require that you enable JavaScript in your browser.
END_OF_DOCUMENT_TOKEN_TO_BE_REPLACED

This feature require that you enable JavaScript in your browser.
END_OF_DOCUMENT_TOKEN_TO_BE_REPLACED

This feature require that you enable JavaScript in your browser.
END_OF_DOCUMENT_TOKEN_TO_BE_REPLACED

This feature require that you enable JavaScript in your browser.
END_OF_DOCUMENT_TOKEN_TO_BE_REPLACED