Blood Brothers: The Dramatic Story of a Palestinian Christian Working for Peace in Israel (Paperback) 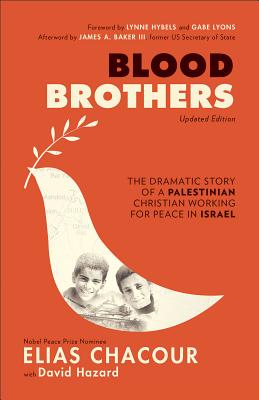 Blood Brothers: The Dramatic Story of a Palestinian Christian Working for Peace in Israel (Paperback)


Usually Ships in 1-5 Days
As a child, Elias Chacour lived in a small Palestinian village in Galilee. When tens of thousands of Palestinians were killed and nearly one million forced into refugee camps in 1948, Elias began a long struggle with how to respond. In Blood Brothers, he blends his riveting life story with historical research to reveal a little-known side of the Arab-Israeli conflict, touching on questions such as:

-What behind-the-scenes politics touched off the turmoil in the Middle East?
-What does Bible prophecy really have to say?
-Can bitter enemies ever be reconciled?

Now updated with commentary on the current state of the Israeli-Palestinian conflict, as well as a new foreword by Lynne Hybels and Gabe Lyons, this book offers hope and insight that can help each of us learn to live at peace in a world of tension and terror.
Elias Chacour, a Melkite priest, is a graduate of the Seminaire du Saint Sulpice in Paris. He has built schools, libraries, community centers, and youth clubs throughout Israel's Galilee region, where he lives, as a source of reconciliation between Palestinians and Jews. David Hazard is the director of Ascent, an author, a publishing consultant, and a writing and creativity coach. For more information, see his website, www.itsyourlifebethere.com.