Count it All Joy: The Ridiculous Paradox of Suffering (Paperback) 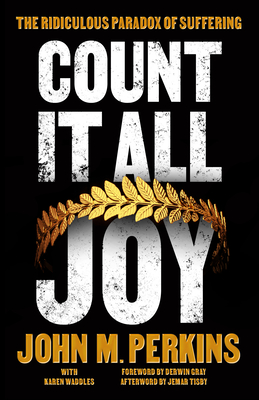 Count it All Joy: The Ridiculous Paradox of Suffering (Paperback)

Can joy come from suffering?

We think of suffering as the worst of all evils. Our culture tells us to avoid it at all costs. But can suffering produce growth in us when we learn to endure it . . . then value it . . . then allow God to redeem it?

John Perkins’ response to suffering at the hands of a white sheriff in a Mississippi jail became the springboard that God used to put him in front of U.S. presidents, international politicians, and evangelical church leaders. Perkins sees endurance in suffering as a virtue that makes us more like Christ and ultimately produces uncommon joy in the heart of the sufferer who trusts in Him. Christ walked the path of love all the way to the cross, and even in the midst our brokenness, we can do the same.

In Count It All Joy, you will be encouraged to lean into suffering when it comes your way, stand alongside others who suffer, and believe that God will repurpose your suffering according to His good plan. God doesn’t intend your life to be free of all suffering. Instead, He wants you trust Him in the midst of it and discover the unexpected joy that trials can produce.

DR. JOHN M. PERKINS is the founder and president emeritus of the John and Vera Mae Perkins Foundation and co-founder of Christian Community Development Association. He has served in advisory roles under five U.S. presidents, is one of the leading evangelical voices to come out of the American civil rights movement, and is an author and international speaker on issues of reconciliation, leadership, and community development. For his tireless work he has received 14 honorary doctorates from universities including: Virginia University of Lynchburg, Wheaton College, Gordon College, Huntington College, Geneva College, Spring Arbor University, North Park College, and Belhaven College. In 2004 he partnered with Seattle Pacific University to launch the campus-based John Perkins Center for Reconciliation, Leadership Training, and Community Development.

KAREN WADDLES is a graduate of DePaul University and is completing a MASF at Moody Theological Seminary. She is a contributing writer to One Blood: Parting Words to the Church on Race (Moody Publishers), Our Voices: Issues Facing Black Women in America (Moody Publishers), The Women of Color Study Bible (Nia Publishing), and the Sisters in Faith Devotional Bible (Thomas Nelson).