The Natural Heritage of Illinois: Essays on Its Lands, Waters, Flora, and Fauna (Paperback) 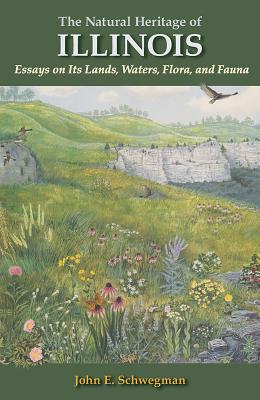 The Natural Heritage of Illinois: Essays on Its Lands, Waters, Flora, and Fauna (Paperback)


Email or call for price
The Natural Heritage of Illinois is an engaging collection of ninety-three essays on the lands, waters, plants, and animals found in Illinois. Written in lively, accessible prose, the book discusses how wind, water, glaciers, earthquakes, fire, and people have shaped Illinois’ landforms, natural habitats, rivers and streams, and the ways in which native plants and animals, from individual species to entire ecosystems, have thrived, survived, or died out.

Author John E. Schwegman looks at the state’s early natural history, including its prehistoric vegetation and wildlife. He describes surviving remnants of formerly widespread species, such as biting horseflies so abundant they could kill a horse and flights of passenger pigeons dense enough to block the sun. The book addresses issues of species decline, the ways animals adapt to climate change and dwindling habitats, and the problem of invasive exotic species. Ecosystem preservation is discussed, and readers will witness prescribed burning techniques and volunteers aiding in natural land management.

Animal and plant conservation in Illinois is illustrated by essays that examine the efforts to save our dwindling Prairie Chicken population and to reintroduce river otters, the return of nesting bald eagles and cormorants to the state, the discovery of armadillos in southern Illinois, the pros and cons of feeding birds, and the biological significance of frog calls. Essays on Illinois’ native plants cover a wide range of topics, from defensive strategies to poisonous and edible species, prairie’s dependence on fire, how to recognize our wild roses, orchids, prairie grasses, and more. Full of fascinating information and expert knowledge, this book will prove invaluable to scholars, students, teachers, and casual nature lovers.
John E. Schwegman is the principal author of The Natural Divisions of Illinois, a classification of the state’s natural lands that guides the development of the Illinois Nature Preserves System. He established the Natural Areas Program (now Division of Natural Heritage) at the Illinois’ Department of Natural Resources and since retirement has served as a commissioner of the Illinois Nature Preserves Commission. He led the founding of the Natural Areas Association, America's professional society for nature conservationists, and served as its first President. Currently, he serves as a consultant to the Illinois Nature Preserves Commission.
"The author presents— a wide range of topics that illustrate the natural history of the state and the effort to study and preserve the plants and animals that live here"—Journal of the Illinois State Historical Society

“The ninety-three essays on the natural features of Illinois reflect the author’s lifetime of study of the plants, animals, rocks, landforms, and other natural phenomena in the state. Schwegman’s keen observation skills are exhibited in each of the essays. Many readers will feel as if they are with Schwegman in the field as they read these eloquently written vignettes of nature.”—Robert H. Mohlenbrock, Distinguished Professor Emeritus, Southern Illinois University

"The Natural Heritage of Illinois is a kind of handbook for better appreciation of our outdoor heritage. The book was a good winter read, just what I needed to help get me through the short, cold days and to anticipate the many natural experiences that await as the earth awakens."—Rick Thom, The Missouri Prairie Journal

"The essays are dense with information and well thought out, even as the writing style is approachable and straightforward. The author has spent countless hours in the field, but he has also dug into the research on these topics. The end result condenses some 50 years of experience into short 1–3 page vignettes that illuminate the region’s natural history—not an easy feat."---Greg Spyreas, plant ecologist and botanist, Illinois Natural History Survey