Losing My Virginity: How I've Survived, Had Fun, and Made a Fortune Doing Business My Way (Paperback) 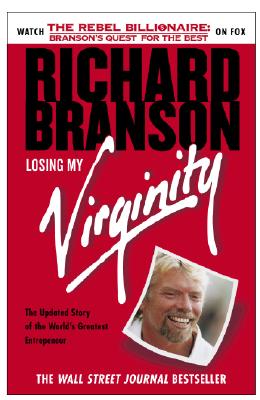 Losing My Virginity: How I've Survived, Had Fun, and Made a Fortune Doing Business My Way (Paperback)

That's the philosophy that has allowed Richard Branson, in slightly more than twenty-five years, to spawn so many successful ventures. From the airline business (Virgin Atlantic Airways), to music (Virgin Records and V2), to cola (Virgin Cola), to retail (Virgin Megastores), and nearly a hundred others, ranging from financial services to bridal wear, Branson has a track record second to none.

Losing My Virginity is the unusual, frequently outrageous autobiography of one of the great business geniuses of our time. When Richard Branson started his first business, he and his friends decided that "since we're complete virgins at business, let's call it just that: Virgin." Since then, Branson has written his own "rules" for success, creating a group of companies with a global presence, but no central headquarters, no management hierarchy, and minimal bureaucracy.

Many of Richard Branson's companies--airlines, retailing, and cola are good examples--were started in the face of entrenched competition. The experts said, "Don't do it." But Branson found golden opportunities in markets in which customers have been ripped off or underserved, where confusion reigns, and the competition is complacent.
And in this stressed-out, overworked age, Richard Branson gives us a new model: a dynamic, hardworking, successful entrepreneur who lives life to the fullest. Family, friends, fun, and adventure are equally important as business in Branson's life. Losing My Virginity is a portrait of a productive, sane, balanced life, filled with rich and colorful stories:

Crash-landing his hot-air balloon in the Algerian desert, yet remaining determined to have another go at being the first to circle the globe

Staging a rescue flight into Baghdad before the start of the Gulf War . . .

Also available in the UK from Virgin Publishing, and in Canada from General Publishing,

Richard Branson, the founder and chairman of the Virgin Group of Companies, was born in 1950 and started his first business, a magazine called Student, when he was sixteen. Virgin began in 1970 as a mail-order record company and has since expanded into over a hundred businesses in areas as diverse as travel, entertainment, retailing, media, financial services, and publishing. He lives in London and Oxfordshire with his wife, Joan, and their children, Holly and Sam. "From the Hardcover edition."

“Richard is good-looking and very smart, which is sexy to start with. He also makes a billion dollars before breakfast—and still knows how to have fun."
-- Ivana Trump
“Few people in contemporary business are as colorful, shrewd, and irreverent, and probably no one’s nearly as much fun to be around. . . . Branson embodies America’s cherished mythology of the iconoclastic, swashbuckling entrepreneur."
-- GQ
“Branson wears his fame and money exceedingly well: no necktie, no chauffeur, no snooty clubs. . . . What continues to set Branson apart is the unique -- and, to some, baffling -- nature of his ambition. . . . He isn’t interested in power in the usual sense of influencing other people. . . . Boiled down to its singular essence, Richard Branson just wants to have fun.”
-- Newsweek
“Branson, a self-described ‘adventure capitalist,’ is a business-creation engine who was clearly born in the wrong place. . . . Those business instincts are matched by an ability to motivate people who work for him. And who wouldn’t want to -- Branson seems hell-bent on making sure that everybody, but everybody, is having as much fun as he is.”
-- Time
“Richard Branson . . . is dressed to the nines: in a $10,000 white silk bridal gown with a traditional veil and train and acres of lace. . . . Branson is expected to do the unexpected, even the bizarre -- anything to publicize his latest venture. . . . The fact is, Branson’s widely reported stunts seem almost staid compared to the unconventional way he manages his burgeoning empire.”
-- Forbes ASAP