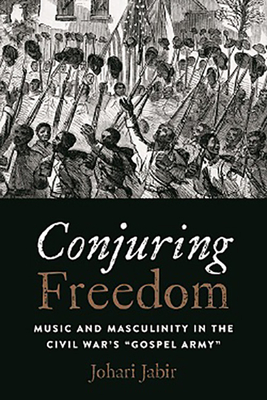 
Usually Ships in 1-5 Days
Conjuring Freedom: Music and Masculinity in the Civil War’s “Gospel Army” analyzes the songs of the 1st South Carolina Volunteers, a regiment of Black soldiers who met nightly in the performance of the ring shout. In this study, acknowledging the importance of conjure as a religious, political, and epistemological practice, Johari Jabir demonstrates how the musical performance allowed troop members to embody new identities in relation to national citizenship, militarism, and masculinity in more inclusive ways. Jabir also establishes how these musical practices of the regiment persisted long after the Civil War in Black culture, resisting, for instance, the paternalism and co-optive state antiracism of the film Glory, and the assumption that Blacks need to be deracinated to be full citizens.
Reflecting the structure of the ring shout—the counterclockwise song, dance, drum, and story in African American history and culture—Conjuring Freedom offers three new concepts to cultural studies in order to describe the practices, techniques, and implications of the troop’s performance: (1) Black Communal Conservatories, borrowing from Robert Farris Thompson’s “invisible academies” to describe the structural but spontaneous quality of black music-making, (2) Listening Hermeneutics, which accounts for the generative and material affects of sound on meaning-making, and (3) Sonic Politics, which points to the political implications of music’s use in contemporary representations of race and history.

Johari Jabir is Assistant Professor at the University of Illinois at Chicago.
“The argument of Conjuring Freedom is engaging and valuable as critical cultural theorizing. The audience for such a book will undoubtedly be diverse, ranging from fields such as African American history, military history, and civil rights to critical race theory, gender and sexuality studies, and cultural studies.” —John Roberts, author of From Trickster to Badman: The Black Folk Hero in Slavery and Freedom

"Examining the complex interplay of sacred and secular elements brought together through the aspirations and agency of African American soldiers, Conjuring Freedom vividly illustrates how the fight for Black emancipation during the U.S. Civil War served as a catalyst for American civil religion’s emergence and evolution.” —Juan Floyd-Thomas, author of Liberating Black Church History: Making It Plain