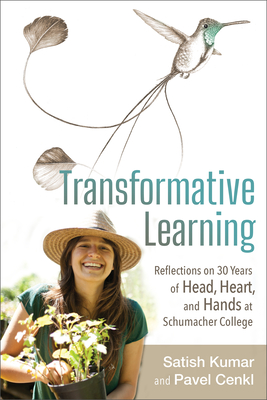 Education as if people and planet mattered

In Transformative Learning , Satish Kumar reflects on the legacy of Schumacher College, a beacon of innovation that fosters an ecological-based, holistic model of higher education built around the college's unique learn by doing, head, heart, and hands pedagogy.

Contributions delve deeply into the nature of transformational learning and holistic education, present a wealth of alumni experiences of working towards an ecological society, and detail the expansion of the Schumacher model to Belgium, Brazil, India, Japan, and beyond.

The result is a rich tapestry of ideas and educational methods packed with insights and experience for practitioners and activists looking to build a just, ecological society.

Satish Kumar, long-time peace and environment activist and former Jain monk, has been quietly setting the global agenda of change for over 50 years. He settled in the United Kingdom after an 8,000-mile peace pilgrimage and took the editorial helm of Resurgence magazine in 1973, a post he held until 2016. Over the decades, he has been the guiding spirit behind a number of internationally respected ecological and educational ventures including founding Devon's Schumacher College; authoring several books, including Elegant Simplicity; and presenting the documentary Earth Pilgrim. Satish was awarded an Honorary Doctorate in Education from the University of Plymouth, an Honorary Doctorate in Literature from the University of Lancaster, and the Jamnalal Bajaj International Award for Promoting Gandhian Values Abroad. He appears regularly in the media, is on the Advisory Board of Our Future Planet, and continues to teach and run workshops as a sought-after speaker in the UK and abroad. He lives in Devon, UK. Pavel Cenkl, PhD, is former Dean of Sterling College, Vermont, a researcher on ecologically minded curriculum development, and an environmental philosophy instructor. An avid endurance and adventure runner, through a project called Climate Run, Pavel has covered hundreds of miles in the Arctic and subarctic on foot in order to bring attention to the connections between our bodies and the more-than-human world in the face of a rapidly changing climate. He is author of Nature and Culture in the Northern Forest and This Vast Book of Nature. He is Head of Schumacher College and lives in Devon, UK.