Immigrants Land: The Tangeman and Schiedt Families in America 1848-1880 (Paperback) 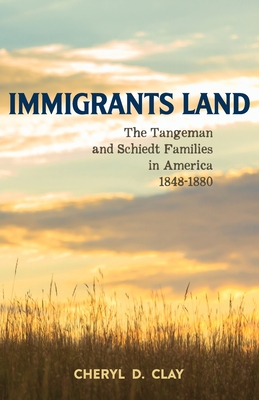 Immigrants Land: The Tangeman and Schiedt Families in America 1848-1880 (Paperback)

The immigrant generation of Tangeman and Schiedt siblings arrived from Prussia and settled in Cincinnati, Ohio in the mid-1800s. These immigrant orphans clungto the old ways while quickly learning to survive within an alien, frequently hostile, community. Tensions between newcomers and established residents played out against the struggle between abolitionists and states rights advocates, the Civil War and rapid technological changes in agriculture following the war.

Immigrants Land: Tangeman and Schiedt Families in America 1848-1880 is a work of historical fiction. It is based on the real lives of the Tangeman brothers, Carl, Wilhelm and George, along with their wives, Anna Barbara and Margaretha Schiedt and Elizabeth Heimers, respectively. These main characters along with five other siblings chose to live in close proximity to one another in Cincinnati. Central to this story are the marriages between two brothers, Carl and Wilhelm Tangeman and two sisters, Anna Barbara and Margaretha Schiedt. Subsequently, these two families, including their sixteen children, migrated to Harvey County, Kansas in 1880.

Immigrants Land is a sequel to Immigrant in Peril: Carl Tangeman's Heroic Journey Across America 1847-1848.