No Bootstraps When You're Barefoot: My Rise from a Jamaican Plantation Shack to the Boardrooms of Bay Street (Hardcover) 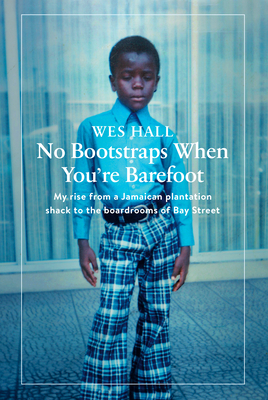 No Bootstraps When You're Barefoot: My Rise from a Jamaican Plantation Shack to the Boardrooms of Bay Street (Hardcover)


Email or call for price
NATIONAL BESTSELLER From one of Canada's most successful business leaders, the founder of the BlackNorth Initiative and the newest and first Black Dragon in the Dragon's Den comes a rags-to-riches story that also carries a profound message of hope and change. Wes Hall spent his early childhood in a zinc-roofed shack, one of several children supported by his grandmother. That was paradise compared to the two years he lived with his verbally abusive and violent mother; at thirteen, his mother threw him out, and he had to live by his wits for the next three years. At sixteen, Wes came to Canada, sponsored by a father he'd only seen a few times as a child, and by the time he was eighteen, he was out of his father's house, once more on his own. Yet Wes Hall went on to become a major entrepreneur, business leader, philanthropist, and change-maker, working his way up from a humble position in a law firm mailroom by way of his intelligence, his curiosity, and his ability to see opportunities that other people don't. When people expected his thick Jamaican accent, lack of money and education, not to mention the colour of his skin, to shut down his future, Wes was not to be stopped. He is still overturning expectations to this day. Well aware of racism and injustice, his lack of privilege and the other roadblocks to his success, Wes has always believed that he can walk along any cliff edge without falling. His book teases out and shows how he fostered that resolve in himself, exploring his childhood and the milestone successes and failures of his career in order to share not only how he stopped himself from falling, but survived and thrived, and then dedicated himself to bringing his family and his community along with him. Now, with the founding of the BlackNorth Initiative, Wes takes aim at ending systemic anti-Black racism. It's a huge goal, but one he's tackling with heart, soul, smarts, and every connection he's made in an extraordinary career that's taken him to the centre of the Canadian establishment. Throughout his life he's resisted sinking into despair or getting lost in anger; now he wants to tell truth to power and pave a path forward.
WES HALL, the executive chairman and founder of Kingsdale Advisors, is one of North America's most influential powerbrokers and Canada's preeminent leader in shareholder advisory services. Hall also founded KSS HoldCo, a private equity company mostly supporting entrepreneurs who are Black, Indigenous, or people of colour. He has many other business interests, including hospitality, real estate, financial services, construction, advisory services, and consumer products. An instructor at the Rotman School of Management at the University of Toronto, he teaches Black Entrepreneurship & Leadership, a first-of-its-kind course in North America. The founder of the anti-Black racism initiative, BlackNorth, he is also one of the investors on the hit TV series Dragon's Den. His podcast, Between Us with Wes Hall, features conversations on systemic racism with leaders of colour.