As it Happened (Paperback) 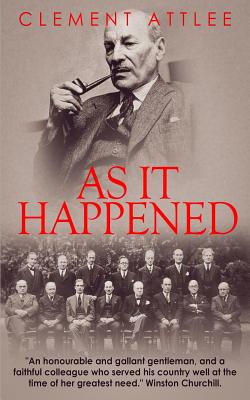 By The Earl Attlee (Introduction by), Clement Attlee
$11.49

"An honourable and gallant gentleman, and a faithful colleague who served his country well at the time of her greatest need." Winston Churchill.

Clement Attlee is to this day remembered as "a sheep in sheep's clothing", after Churchill's now infamous comment.

But As It Happened tells a different and more complex story of a decent, great man who was often misunderstood.

This autobiography takes the reader on a journey through Attlee's life - and through one of the most epochal and uncertain periods in British history.

Attlee documents growing up to see the death of Victorian England, and the end of an era marked by the First World War. He recalls his war service and dedication to his beloved country. He reveals his unique perspective of Britain in the interwar years and how the country began to yearn for change.

As Deputy Prime Minister during Churchill's coalition As It Happened gives us a valuable insight into the war effort and Churchill's leadership.

We are also gifted an insight into Attlee's virtues and achievements as a leader too, how he took the Labour Party to election victory in 1945. The book covers Indian independence, the foundation of the NHS and Attlee's life after his momentous years in office.

Along the way Attlee passes opinion on such figures as Lloyd George, Roosevelt and Edward VII.

As It Happened reveals Clement Attlee as a man of courage and conviction, devoted to his duty and his family.

This is an important book for anyone interested in WW2, the evolution of British politics and this remarkable period of history.

Clement Attlee was born in 1883 and served as British Prime Minister 1945 - 1951. He is also the author of The Social Worker and Purpose and Policy, also published by Sharpe Books.

This feature require that you enable JavaScript in your browser.
END_OF_DOCUMENT_TOKEN_TO_BE_REPLACED

This feature require that you enable JavaScript in your browser.
END_OF_DOCUMENT_TOKEN_TO_BE_REPLACED

This feature require that you enable JavaScript in your browser.
END_OF_DOCUMENT_TOKEN_TO_BE_REPLACED

This feature require that you enable JavaScript in your browser.
END_OF_DOCUMENT_TOKEN_TO_BE_REPLACED