No Simple Highway: A Cultural History of the Grateful Dead (Paperback) 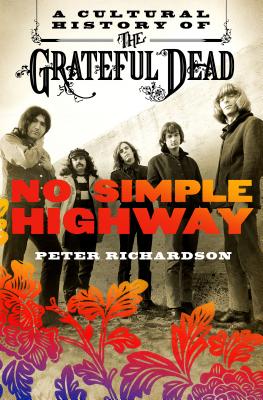 No Simple Highway: A Cultural History of the Grateful Dead (Paperback)

For almost three decades, the Grateful Dead was America's most popular touring band. No Simple Highway is the first book to ask the simple question of why—and attempt to answer it. Drawing on new research, interviews, and a fresh supply of material from the Grateful Dead archives, author Peter Richardson vividly recounts the Dead's colorful history, adding new insight into everything from the Acid Tests to the band's formation of their own record label to their massive late career success, while probing the riddle of the Dead's vast and durable appeal.

Routinely caricatured by the mainstream media, the Grateful Dead are often portrayed as grizzled hippy throwbacks with a cult following of burned-out stoners. No Simple Highway corrects that impression, revealing them to be one of the most popular, versatile, and resilient music ensembles in the second half of the twentieth century. The band's history has been well-documented by insiders, but its unique and sustained appeal has yet to be explored fully. At last, this legendary American musical institution is given the serious and entertaining examination it richly deserves.

PETER RICHARDSON is an author and lecturer in the humanities department at San Francisco State University and outgoing chair of the California Studies Association. Before that, he was the founding editorial director at PoliPointPress, which published trade books on politics and current affairs; an editor at the Public Policy Institute of California, a think-tank based in San Francisco; a tenured English professor at the University of North Texas; and an acquisitions editor at Harper & Row, Publishers. He has received a Fulbright Senior Scholar Award, an NEH Summer Seminar fellowship at Harvard University, and various other research and teaching awards. He chaired the California Studies Association from 2007 to 2011 and holds a Ph.D. in English from the University of California, Berkeley.

“Richardson writes with enthusiasm....He paints the Dead as a utopian experiment in a long American tradition.” —Harper's Magazine

“While Dead devotees will revel in the wealth of biographical details here, every reader interested in music and its social repercussions will find Richardson's work both captivating and instructive.” —Booklist

“[A] far-ranging look at the ultimate jam band in the acid-drenched context of their formative years.” —Kirkus

“An exhaustively researched and entertaining cultural history of one of the most successful yet resolutely iconoclast musical groups ever.” —Shelf Awareness

“The psycho-socio-musical experiment that was the Grateful Dead packed a unique complexity and sheer substantiality into their ongoing if occasionally bumbling attempts to recast the American dream. In No Simple Highway, Peter Richardson deftly applies a clear-eyed, insightful, and wide-ranging vision in explicating the reasons that a gaggle of stoned musicians was able to generate one of the most enduring communities in American social history.” —Dennis McNally, G.D. historian and author, On Highway 61/Music, Race, and the Evolution of Cultural Freedom

“Training his eye through the telescope of cultural history, Peter Richardson's entertaining and well-researched No Simple Highway reveals the valleys, craters, and mountains of the moonscape that comprise the history of the Grateful Dead.” —Peter Conners, author of Growing Up Dead and JAMerica

“No Simple Highway is a rare combination of excellent research and move-it-along readability. This is a book to return to, again and again.” —Rosie McGee, Author/Photographer, Dancing with the Dead: A Photographic Memoir