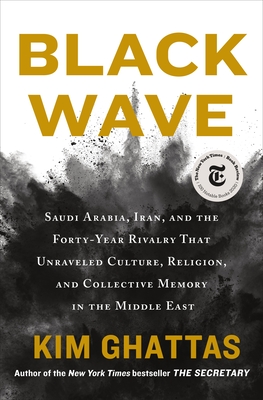 “[A] sweeping and authoritative history" (The New York Times Book Review), Black Wave is an unprecedented and ambitious examination of how the modern Middle East unraveled and why it started with the pivotal year of 1979.

Kim Ghattas seamlessly weaves together history, geopolitics, and culture to deliver a gripping read of the largely unexplored story of the rivalry between between Saudi Arabia and Iran, born from the sparks of the 1979 Iranian revolution and fueled by American policy.

With vivid story-telling, extensive historical research and on-the-ground reporting, Ghattas dispels accepted truths about a region she calls home. She explores how Sunni Saudi Arabia and Shia Iran, once allies and twin pillars of US strategy in the region, became mortal enemies after 1979. She shows how they used and distorted religion in a competition that went well beyond geopolitics. Feeding intolerance, suppressing cultural expression, and encouraging sectarian violence from Egypt to Pakistan, the war for cultural supremacy led to Iran’s fatwa against author Salman Rushdie, the assassination of countless intellectuals, the birth of groups like Hezbollah in Lebanon, the September 11th terrorist attacks, and the rise of ISIS.

Ghattas introduces us to a riveting cast of characters whose lives were upended by the geopolitical drama over four decades: from the Pakistani television anchor who defied her country’s dictator, to the Egyptian novelist thrown in jail for indecent writings all the way to the murder of journalist Jamal Khashoggi in the Saudi consulate in Istanbul in 2018. Black Wave is both an intimate and sweeping history of the region and will significantly alter perceptions of the Middle East.

Kim Ghattas is an Emmy-award winning journalist and writer who covered the Middle East for twenty years for the BBC and the Financial Times. She has also reported on the U.S State Department and American politics. She has been published in The Atlantic, the Washington Post, and Foreign Policy and is currently a non-resident scholar at the Carnegie Endowment for International Peace in Washington. Her first book, The Secretary, was a New York Times bestseller. Born and raised in Lebanon, she now lives between Beirut and Washington D.C.

“She serves up a wealth of human interest wrapped in ambiance and atmosphere. She paints riveting portraits of the protagonists… a superbly researched and subtly told story—current history at its best.” —The Wall Street Journal

“[A] wonderfully readable account… Ghattas has an enviable gift for going beyond politics… Whatever happens next in this long-running, oppressive and dangerous Middle Eastern drama, Black Wave will be a vivid, indispensable guide to the story so far.” —The Guardian

“A timely and welcome guide to the politics of a region…Well-researched and elegantly written.” —The Financial Times

“Unlike narratives told from a Western point of view, this book doesn’t highlight terrorism or ISIS but instead seamlessly weaves history and personal narrative into a story that explains the gradual suppression of intellectualism and the creep of authoritarianism in the region…Illuminating, conversational, rich in details and like nothing else you’ve ever read about the Middle East, Black Wave will leave you with a new understanding of this diverse and troubled region.” —BookPage

“The publication of this book, Black Wave, could not be better timed. In it, Kim Ghattas argues convincingly that the revolution that brought Ayatollah Khomeini to power in 1979 was one of three events that year that profoundly shaped — or rather misshaped — the Middle East… a fascinating and winding but highly readable tale.” —The Times (UK)

“[An] illuminating account of the origins of sectarian violence and the current political shape of the Muslim world… [a] fluid, fast-moving narrative...Essential for all who follow world events.” —Kirkus Reviews, *starred review*

“Skillfully written and scrupulously researched, Black Wave is an essential book in understanding the origins of the modern conflicts in the Middle East.” —Lawrence Wright, Pulitzer Prize-winning author of The Looming Tower

"The framing of Black Wave is as important as the content. Kim Ghattas portrays the last four decades across the Middle East as a dark age, a world dimmed behind a curtain of violence, misogyny, and religious extremism. In exploring how this blackness came to be, she recalls a brighter past and predicts a better future. It's a powerful and important book." —Anne-Marie Slaughter, CEO of the New America Foundation and former Director of Policy Planning at the Department of State

“Kim Ghattas is a superb writer and reporter, which makes Black Wave an accessible and very interesting account of the sectarian schism and regional rivalry between Iran and Saudi Arabia that has riven the Middle East for decades and is one of the most consequential contests threatening global security.” —Peter Bergen, author of Manhunt

"An artful, gripping, timely, and humane account of the roots and consequences of the destructive rivalry between Iran and Saudi Arabia from one of the region's most insightful and incisive observers." —Ambassador William J. Burns, President, Carnegie Endowment for International Peace and former Deputy Secretary of State

“A well-researched and highly readable primer on the rivalry between Shias and Sunnis shaping today’s Middle East. Kim Ghattas masterfully traces the origins of sectarianism in the explosive rise of Islamic fundamentalism in 1979 and the destructive Saudi-Iranian rivalry that followed. Told through the experiences of those who lived and shaped sectarianism, Black Wave is both gripping and informative; a must read for anyone interested in understanding the forces shaping the Middle East today.” —Vali Nasr, professor of international affairs and Middle East politics at the School of Advanced International Studies of Johns Hopkins University and author of Shia Revival

“Clear-eyed and honest, perfectly researched and brilliantly written, a unique book that is about more than the Saudi-Iran rivalry as it illuminates how and why the region began to turn inward over the last 100 years—a must read for outsiders and people in the region.” —Marwan Muasher, Vice President for studies at the Carnegie Endowment for International Peace and former minister of foreign affairs of Jordan

"Black Wave is a brilliant piece of work. Ghattas reveals how the competition between Tehran and Riyadh, instigated in 1979 by the Iranian revolution and the siege of Mecca—and intensified after the 2003 US invasion of Iraq—led to the instrumentalization of Islam to destroy cosmopolitanism, to force women to veil, and to mobilize sectarian extremists." —Emma Sky, senior fellow at Yale University’s Jackson Institute and author of In a Time of Monsters