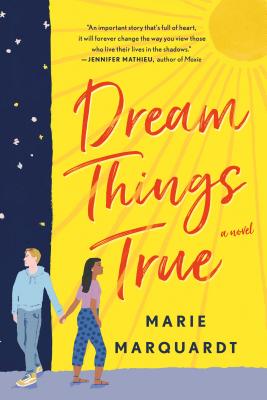 A modern-day Romeo and Juliet story in which a wealthy Southern boy falls in love with an undocumented Mexican girl and together they face perils in their hostile Georgia town.

Evan and Alma have spent fifteen years living in the same town, connected in a dozen different ways but also living worlds apart -- until the day he jumps into her dad's truck and slams on the brakes.
The nephew of a senator, Evan seems to have it all - except a functional family. Alma has lived in Georgia since she was two, surrounded by a large (sometimes smothering) Mexican family. They both want out of this town. His one-way ticket is soccer; hers is academic success.

When they fall in love, they fall hard, trying to ignore their differences. Then Immigration and Customs Enforcement begins raids in their town, and Alma knows that she needs to share her secret. But how will she tell her country-club boyfriend that she and almost everyone she's close to are undocumented immigrants?

What follows is a beautiful, nuanced exploration of the complications of immigration, young love, defying one's family, and facing a tangled bureaucracy that threatens to completely upend two young lives. This page-turning debut asks tough questions, reminding us that love is more powerful than fear in Dream Things True by Marie Marquardt.

Marie Marquardt is a Scholar-in-Residence at Emory University's Candler School of Theology and the author of Living Illegal: The Human Face of Unauthorized Immigration. She is widely published in the areas of religion, inter-ethnic relations, and civic participation of Mexican immigrants in the U.S. South. Marquardt has also worked extensively as an advocate among immigrants in Atlanta. She is a founding organizer and currently serves as co-chair of El Refugio, a hospitality house outside the gates of the Stewart Detention Center in Lumpkin, Georgia. Marie is also a member of the We Need Diverse Books team. Marquardt lives with her husband and four children in a very busy household in Decatur, Georgia. Dream Things True is her first young adult novel.

“Marquardt knowledgably takes on the plight of undocumented families . . . readers seeking a star-crossed love story with a twist won't be disappointed” —Publishers Weekly

“Marquardt has a lot to teach . . . but never does it feel didactic. Instead, Marquardt envelops you into the story of this one family and this one young couple trying to beat the odds.” —Bustle

“Worthy examination of undocumented immigration in the American South through the lens of young love.” —Kirkus

“Marquardt provides a critical view of the stigmas and difficulties plaguing undocumented youth in U.S. schools without glossing over the legal realities of deportation and detainment. Readers will find the romantic aspects of Alma and Evan's relationship sweet and exciting.” —School Library Journal

“Marquardt has written a book with a hopeful, if not happy, ending, filled with stark details about life in the U.S. for undocumented families. Eye-opening and touching.” —Booklist

"Dream Things True is a satisfying and rich debut novel about love and the importance of following dreams." -Américas Award Committee

“A true Romeo and Juliet romance with a wider moral sweep-tender, heart-wrenching and wise. Every character shines.” —Huntley Fitzpatrick, author of What I Thought Was True

“DREAM THINGS TRUE by Marie Marquardt is a story that must be told and needs to be read. With sensitivity and care, Marquardt deftly illustrates the struggles and hopes of Alma, an undocumented teenager living in the United States. Alma's story reflects the lives of millions of young people trapped between countries and cultures, longing for a place to belong. An important story that's full of heart, it will forever change the way you view those who live their lives in the shadows.” —Jennifer Mathieu, author of The Truth About Alice

“A compelling read with complex, true-to-life characters, DREAM THINGS TRUE is a unique novel. Not only will it cause readers to empathize with characters in difficult situations, it will get them to consider the plight of people in the real world. Add in a love story you can root for.” —Adi Alsaid, author of Let's Get Lost

“Marquardt's Dreams Things True vividly weaves to life the thrill of falling in love in the South while awakening readers to the struggles of US-Mexican immigration policies. In this touching coming-of-age story, full of hope and possibilities, Marquardt captures the bittersweet world of undocumented teens living in the US and the power of true love.” —Malin Alegria, author of Border Town series