All the Best Liars: A Novel (Hardcover) 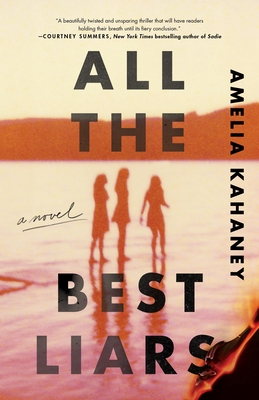 All the Best Liars: A Novel (Hardcover)

Amelia Kahaney's All the Best Liars is a dark, modern psychological thriller and coming-of-age story about obsession, manipulation, and the intensity of those first friendships that take hold of you and never let go

Tic-tac-toe, three girls in a row. Nine years old and inseparable. Friends for life, or so they think . . .

Best friends Syd, Rain, and Brie grew up on the wrong side of the tracks in the stifling California desert, desperately wishing for a way out.

When a deadly fire is set two weeks before the end of high school, nothing will ever be the same. In the end, each of them will escape—but not in the way any of them expects. One will do it by dying, another by lying, a third by taking the fall.

With gorgeous, taut prose and twists to the very last page, All the Best Liars alternates between the present and the past to unravel the truth behind the fire and the cost of the secrets at the heart of their friendship.

Amelia Kahaney is the author of The Brokenhearted series. Her short fiction has appeared in Best American Nonrequired Reading, One Story, and Crazyhorse, among other publications. She teaches writing in New York City, where she lives with her husband and son.

“A searing and provocative exploration of friendship, desire, envy and obsession, of girls pushed to the very edge. Amelia Kahaney has written a beautifully twisted and unsparing thriller that will have readers holding their breath until its fiery conclusion.”
—Courtney Summers, author of I’m the Girl

“Haunting, propulsive, and totally sinister. With stunning prose and gut-punch twists, All the Best Liars is a moving portrayal of the desperation that comes with being a girl trying to make a better life for herself.”
—Jessica Goodman, author of The Counselors

“All the Best Liars opens with the slow burn of intense teen friendship and accelerates into a roaring blaze that will consume you in the best—and darkest—way. I’m still shaking!”
—Kit Frick, author of Very Bad People

“An atmospheric, richly drawn thriller about the complex nature of friendship. Amelia Kahaney unflinchingly captures the obsessive intensity of our earliest relationships, where trust is hard to come by, resentments simmer and burn, and whole friendships can go up in flames—literally.”
—Kass Morgan, author of The Ravens

“Insanely addictive and gorgeously written. With vivid characters and a plot that keeps twisting, All The Best Liars took me right back to those early, intense female friendships and kept me reading through the night.”
—Laura Sims, author of Looker

“Kahaney has penned an intimate, suspenseful mystery that burns slowly until its surprisingly explosive ending. Underneath the surface is a commentary on the stark disparities between the rich and the poor.
. . . A prescient read for young people living in economically turbulent times.”
—Booklist

“A dynamic, suspenseful tale of friendship and betrayal.”
—Kirkus Reviews