Merv: The Heart of the Silk Road (Game) 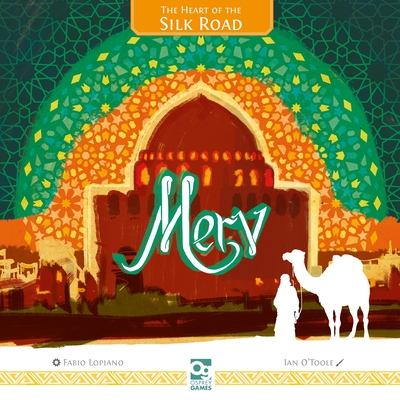 A tense economic game charting the rise and fall of the greatest city in the world.

In Merv: The Heart of the Silk Road players are vying to amass power and wealth in the prosperous heart of the Silk Road. Through careful court intrigue, timely donations to the grand mosque, and securing favorable trade deals, players attempt to redirect as much of that prosperity as possible into their own pockets.

Meanwhile, beyond the city walls Mongol hordes approach. If you help construct the city walls you give up on precious opportunities to build up your own stature, but leave it unprotected and you will burn with the city. Every decision is weighty and the consequences of each misstep are dire. Will you rise to prominence or fade into oblivion?

Having enjoyed a distinguished programming career, working for Google, Facebook, and DeepMind, Fabio Lopiano has recently turned his attention toward game design. With several well received and critically acclaimed titles in the last few years, including Calimala and Ragusa, Fabio is widely considered one of the most promising up and coming designers in the UK.

Having grown up in Sicily, and studied in Tuscany, Fabio now lives in London, UK.