Life Changing: SHORTLISTED FOR THE WAINWRIGHT PRIZE FOR WRITING ON GLOBAL CONSERVATION (Paperback) 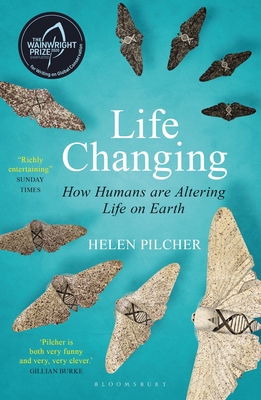 Life Changing: SHORTLISTED FOR THE WAINWRIGHT PRIZE FOR WRITING ON GLOBAL CONSERVATION (Paperback)

SHORTLISTED FOR THE WAINWRIGHT PRIZE FOR WRITING ON GLOBAL CONSERVATION

For the last three billion years or so, life on Earth was shaped by natural forces. Evolution tended to happen slowly, with species crafted across millennia. Then, a few hundred thousand years ago, along came a bolshie, big-brained, bipedal primate we now call Homo sapiens, and with that, the Earth's natural history came to an abrupt end. We are now living through the post-natural phase, where humans have become the leading force shaping evolution.

This thought-provoking book considers the many ways that we've altered the DNA of living things and changed the fate of life on earth. We have carved chihuahuas from wolves and fancy chickens from jungle fowl. We've added spider genes to goats and coral genes to tropical fish. It's possible to buy genetically-modified pets, eat genetically-modified fish and watch cloned ponies thunder up and down the polo field.

Now, as our global dominance grows, our influence extends far beyond these species. As we warm our world and radically reshape the biosphere, we affect the evolution of all living things, near and far, from the emergence of novel hybrids such as the pizzly bear, to the entirely new strains of animals and plants that are evolving at breakneck speed to cope with their altered environment.

In Life Changing, Helen introduces us to these post-natural creations and talks to the scientists who create, study and tend to them. At a time when the future of so many species is uncertain, we meet some of the conservationists seeking to steer evolution onto firmer footings with novel methods like the 'spermcopter', coral IVF and plans to release wild elephants into Denmark. Helen explores the changing relationship between humans and the natural world, and reveals how, with evidence-based thinking, humans can help life change for the better.

Helen Pilcher is a tea-drinking, biscuit-nibbling science and comedy writer. She has a PhD in Cell Biology from London's Institute of Psychiatry. A former reporter for Nature, she now specializes in biology, medicine and quirky off-the-wall science, and writes for outlets including New Scientist and BBC Focus. Unusually for a self-proclaimed geek, Helen also used to be a stand-up comedian before the arrival of children meant she couldn't physically stay awake past 9pm. She now gigs from time to time, and lives in rural Warwickshire with her husband, three kids and besotted dog.

“An impressive rendering of the disturbing history of human tinkering with nature.” —Kirkus Review

“Pilcher's amusing yet grounded excursion into the essential ways humans, animals, plants, and microorganisms must coexist is both a rich and riotous popular science trove well worth contemplating.” —Booklist