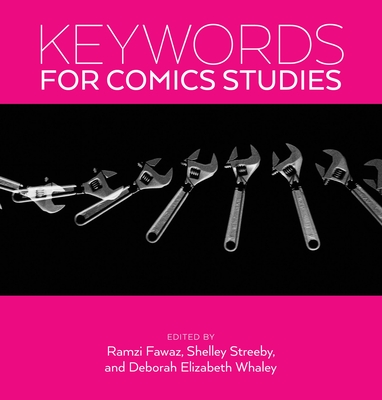 Introduces key terms, research traditions, debates, and histories, and offers a sense of the new frontiers emerging in the field of comics studies

Across more than fifty original essays, Keywords for Comics Studies provides a rich, interdisciplinary vocabulary for comics and sequential art. The essays also identify new avenues of research into one of the most popular and diverse visual media of the twentieth and twenty-first centuries. Keywords for Comics Studies presents an array of inventive analyses of terms central to the study of comics and sequential art that are traditionally siloed in distinct lexicons: these include creative and aesthetic terms like Ink, Creator, Border, and Panel; conceptual terms such as Trans*, Disability, Universe, and Fantasy; genre terms like Zine, Pornography, Superhero, and Manga; and canonical terms like X-Men, Archie, Watchmen, and Love and Rockets. This volume ties each specific comic studies keyword to the larger context of the term within the humanities. Essays demonstrate how scholars, cultural critics, and comics artists from a range of fields take up sequential art as both an object of analysis and a medium for developing new theories about embodiment, identity, literacy, audience reception, genre, cultural politics, and more. Keywords for Comics Studies revivifies the fantasy and magic of reading comics in its kaleidoscopic view of the field's most compelling and imaginative ideas.
Ramzi Fawaz (Editor) ​​Ramzi Fawaz is Professor in the Department of English at the University of Wisconsin-Madison. He is the author of The New Mutants: Superheroes and the Radical Imagination of American Comics and co-editor of Keywords for Comics Studies. With Darieck Scott, he co-edited the special issue of American Literature, "Queer About Comics," which won the 2019 best special issue award from the Council of Editors of Learned Journals. Deborah Whaley (Editor) Deborah Elizabeth Whaley is an artist, curator, writer, and Professor of American Studies and African American Studies at the University of Iowa. She is the author of two books and numerous articles, book chapters, and poetry. Her most recent book is Black Women in Sequence: Re-inking Comics, Graphic Novels, and Anime. Shelley Streeby (Editor) Shelley Streeby is Professor in the Departments of Ethnic Studies and Literature at the University of California, San Diego, and author of Imagining the Future of Climate Change: World-Making through Science Fiction and Activism.