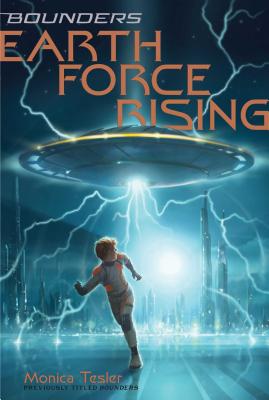 This is book number 1 in the Bounders series.

In the tradition of Michael Vey and The Unwanteds, twelve-year-old Jasper and his friends are forced to go up against an alien society in this first book in a brand-new adventure series!

Bounders have always known they were different, but they never suspected they were the key to saving Earth.

Thirteen years ago, Earth Force—a space-military agency—discovered a connection between brain structure and space travel. Now they’ve brought together a team of cadets, called Bounders, to be trained as elite astronauts able to pilot ships that can travel across the galaxy in an instant.

Jasper Adams can’t wait to join the first class of Bounders, but when he arrives at the space station, nothing is as it seems. Security is sky-high, and Jasper and his new friends soon realize that Earth Force has been keeping secrets—one of the biggest being a powerful, highly-classified technology that allows the Bounders to teleport through space without a ship. Only Bounders can use this tech, which leads Jasper to a sinister truth—humanity is facing a threat greater than any they’ve ever known, and Bounders are the ones standing between their planet and destruction.

Will Jasper and his friends rebel against Earth Force for hiding the truth, or fulfill their duty and fight for their planet? The fate of Earth may rest on their choice.
Monica Tesler lives south of Boston with her husband and two boys. She earned her undergraduate and law degrees from the University of Michigan. She writes on the commuter boat, in coffee shops, and at her kitchen table. She tries to meditate every day but often ends up fantasizing about space, time travel, or strange lands, both real and imagined.