To Hell and Back: My Life in Johnny Thunders' Heartbreakers, in the Words of the Last Man Standing (Paperback) 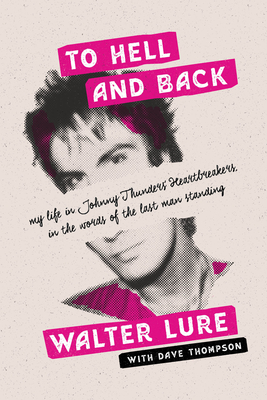 To Hell and Back: My Life in Johnny Thunders' Heartbreakers, in the Words of the Last Man Standing (Paperback)

By Walter Lure, Dave Thompson (With)


Email or call for price
There have been many books written about Johnny Thunders and the Heartbreakers, but only by people who weren't there. Walter Lure was--from the band's chaotic beginnings on New York's Lower East Side, through a now-legendary UK tour with the Sex Pistols and the Clash, and on to a yearlong stay in London--eyewitness and midwife to the birth of UK punk. Now, he tells his story in To Hell and Back, a thrilling ride through the clubs and dives of two continents, in the company of one of the most notorious junkies in rock 'n' roll history. Drawing from his own contemporary journals, Lure paints a vivid portrait of life in both cities, during perhaps the most crucial musical uprising of the past forty years...the music, the characters, the clothes, the fights, the drugs, the orgies, the lot. Lure lays bare his own battle with drugs, and reflects upon his life after the band's split--rising to become a Wall Street fixture yet still finding time to make music.
Walter Lure Walter Lure's latest album, Wacka Lacka Boom Bop A Loom Bam Boo, received great reviews across the media spectrum, and his most recent (spring 2019) tour sold out venues throughout the US. He was also heavily involved with Jungle Records' regular reexaminations of the Heartbreakers' recorded legacy. Dave Thompson Dave Thompson is the author of over 150 books, including co-written memoirs with New York Doll Sylvain Sylvain, Motown legends Brian and Eddie Holland (forthcoming), Hawkwind's Nik Turner, the Yardbirds' Jim McCarty, Fairport Convention's Judy Dyble, and more. He is a columnist for Goldmine magazine, and his work has also appeared in Rolling Stone, Spin, Alternative Press, Mojo, Record Collector, and many other major publications. He has contributed to music documentaries produced by VH-1, A&E, the BBC, and others. Born in the UK, Thompson is now a US resident living in Delaware.