10 Things I Hate about Pinky (Hardcover) 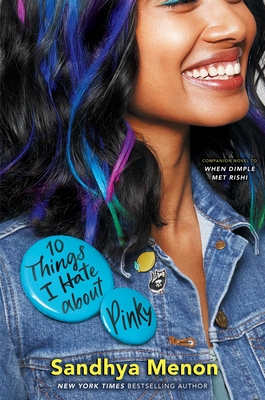 10 Things I Hate about Pinky (Hardcover)


Usually Ships in 1-5 Days
The delightful follow-up to When Dimple Met Rishi and There’s Something about Sweetie, which follows Ashish’s friends Pinky and Samir as they pretend to date in order to achieve their individual goals, to disastrous and hilarious results.

Pinky Kumar wears the social justice warrior badge with pride. From raccoon hospitals to persecuted rock stars, no cause is too esoteric for her to champion. But a teeny tiny part of her also really enjoys making her conservative, buttoned-up corporate lawyer parents cringe.

Samir Jha might have a few…quirks remaining from the time he had to take care of his sick mother, like the endless lists he makes in his planner and the way he schedules every minute of every day, but those are good things. They make life predictable and steady.

Pinky loves lazy summers at her parents’ Cape Cod lake house, but after listening to them harangue her about the poor decisions she’s made (a.k.a. boyfriends she’s had), she hatches a plan. Get her sorta-friend-sorta-enemy—who is a total Harvard-bound Mama’s boy—to pose as her perfect boyfriend for the summer.

When Samir’s internship falls through, leaving him with an unplanned summer, he gets a text from Pinky asking if he’ll be her fake boyfriend in exchange for a new internship. He jumps at the opportunity; Pinky’s a weirdo, but he can survive a summer with her if there’s light at the end of the tunnel.

As they bicker their way through lighthouses and butterfly habitats, sparks fly, and they both realize this will be a summer they'll never forget.
Sandhya Menon is the New York Times bestselling author of When Dimple Met Rishi, Of Curses and Kisses, and many other novels that also feature lots of kissing, girl power, and swoony boys. Her books have been included in several cool places, including the Today show, Teen Vogue, NPR, BuzzFeed, and Seventeen. A full-time dog servant and part-time writer, she makes her home in the foggy mountains of Colorado. Visit her online at SandhyaMenon.com.