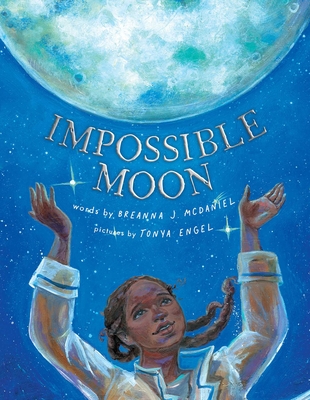 
Usually Ships in 1-5 Days
A young girl undertakes an impossible trip to the moon, makes friends with the stars, and brings back something priceless in this gentle and lyrically told picture book about family, history, and memory.

Grana used to tell the best stories, and Mabel used to long to soar through the heavens. Nowadays, Grana mostly lies in bed and Mabel stays close to home. But one day, Grana asks, “If we can touch the moon, then what is impossible?”

So Mabel decides to do just that, embarking on a journey through the stars where The Seven Sistahs, The Big Dipper, and other constellations help her on her quest and teach her about African mythology and African American history. With the support of her new companions, Mabel reaches for her biggest dream yet: to make her sick grandma well again.
Breanna J. McDaniel is the author of Hands Up! and Impossible Moon and a children’s literature scholar. She holds an MA in children’s literature from Simmons College and is currently pursuing her PhD at Cambridge University, where her research focuses on representations of black children in contemporary picture books.

Tonya Engle is a self-taught painter and children’s book illustrator, including the pictures for Our Lady of Guadalupe and Impossible Moon and the jacket art for Hurricane Child. Her work is inspired by Southern folk artists. Early in her career, she explored abstract painting but soon began to concentrate on figurative form mixed with emotion and expressionistic narrative. This art style was the perfect complement to Maya Angelou’s lyrical storytelling. Engel lives in Houston, Texas.
Young astronomer Mable loves to listen to Grana’s stories, but her grandmother is ill and “too weak to tell stories now.” As Mable stays close to Grana’s bedside, she looks up at the sky through a telescope, making maps of the constellations. “If we can touch the moon,” Grana asks her granddaughter, “then what is impossible?”

Later that night, Mable embarks on a quest to “make impossible things possible” by touching the moon. After a countdown, she rockets into the sky like a spaceship. As she soars among the constellations, she recognizes fantastical figures from her grandmother’s tales of African mythology and African American history, including an archer, a pair of twins and a friendly dog. When Mable stops for a sip of water from the drinking gourd, she sees tracks that remind her of the Underground Railroad. Eventually, she begins to feel tired, and a group of celestial women cocoon her in a blanket of stars until she falls asleep. No miracle awaits when Mable awakens the next morning, but Grana feels well enough to sit up and ask Mable to tell her a story.

Illustrator Tonya Engel’s oil and acrylic illustrations are richly hued and playful. Small flames trail behind Mable’s feet as she shoots up into the sky, a rocket ship of a girl. Brilliant blues evoke the dreamlike atmosphere of Mable’s nighttime adventure, while tiny splatters of white and yellow convey the vast number of distant stars.

Readers who enjoyed Antwan Eady and Gracey Zhang’s Nigel and the Moon won’t want to miss this fresh, imaginative lunar tale. It belongs on the nightstands of young dreamers everywhere
— BookPage