The Teachings of Zoroaster: An Explanation of Zoroastrianism and its Connection to Christianity (Paperback) 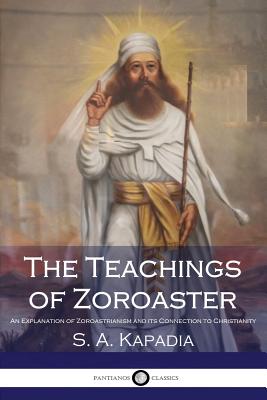 Kapadia's investigation of the Zoroastrian faith is important for clarifying and defining the important religious tenets native to followers of Zoroaster.
Zoroastrianism is most famously known as the world's first major monotheistic religion. Zoroaster's assertion, made in his home country of Persia sometime between 1500 and 650 BC, was that there was only One God who governed over everything in the known Earth and wider universe. Over centuries, Zoroaster's creed became dominant in what is now modern-day Iran.
In the ancient era, the belief in a single, omnipresent God was radical and profoundly different from the paganism which had come before it. Many people - including those in Greece and Rome - continued to worship a pantheon consisting of many Gods, corresponding to the elements of the physical world, for many centuries after Zoroaster perished.
S. A. Kapadia authored this explanation of Zoroastrianism in the early twentieth century. It contains an explanation of numerous tenets and the core doctrines of the faith. The simplicity at the core of these early teachings, which encourage good faith, good thoughts and good behavior in relation to one's fellow man, are duly explained in Kapadia's text.
This book is, overall, a fine introduction to a religion which remains little-known, or even misconceived, in the West. The clarifying message Kapadia seeks to deliver and instill in readers remains valuable and important.

This feature require that you enable JavaScript in your browser.
END_OF_DOCUMENT_TOKEN_TO_BE_REPLACED

This feature require that you enable JavaScript in your browser.
END_OF_DOCUMENT_TOKEN_TO_BE_REPLACED

This feature require that you enable JavaScript in your browser.
END_OF_DOCUMENT_TOKEN_TO_BE_REPLACED

This feature require that you enable JavaScript in your browser.
END_OF_DOCUMENT_TOKEN_TO_BE_REPLACED