You Can't Always Get What You Want: My Life with the Rolling Stones, the Grateful Dead and Other Wonderful Reprobates (Paperback) 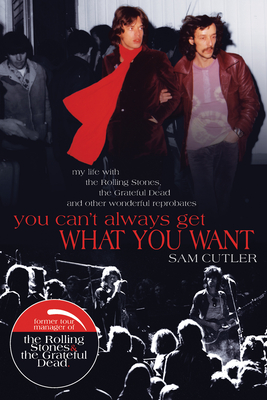 You Can't Always Get What You Want: My Life with the Rolling Stones, the Grateful Dead and Other Wonderful Reprobates (Paperback)

A "straight-dope, tell-all account" of touring with two of the world's greatest bands of the 60s and 70s -- A "fast-moving narrative of rock-n-roll excess." (Publishers Weekly)

Sam draws intimate portraits of other stars of the psychedelic circus that was the music industry in the sixties and seventies, including Janis Joplin, Jimi Hendrix, The Band, the Allman Brothers, Pink Floyd, and Eric Clapton

In this all-access memoir of the psychedelic era, Sam Cutler recounts his life as a tour manager for the Rolling Stones and the Grateful Dead -- whom he calls the yin and yang of bands. After working with the Rolling Stones at their historic Hyde Park concert in 1969, Sam managed their American tour later that year, when he famously dubbed them "The Greatest Rock Band in the World." And he was caught in the middle as their triumph took a tragic turn during a free concert at the Altamont Speedway in California, where a man in the crowd was killed by the Hell's Angels.

After that, Sam took up with the fun-loving Grateful Dead, managing their tours and finances, and taking part in their endless hijinks on the road. With intimate portraits of other stars of the time -- including Janis Joplin, Jimi Hendrix, the Band, the Allman Brothers, Pink Floyd, and Eric Clapton -- this memoir is a treasure trove of insights and anecdotes that bring some of rock's greatest legends to life.

Sam Cutler has been at the centre of some of the most exciting developments in the music industry, and has worked with the two largest grossing live artists in the world, the Rolling Stones and the Grateful Dead. Sam now lives and works in the Pacific area with a particular interest in Australian and New Zealand artists.

"A fascinating historical snapshot not only on the life and heady times of the Stones, the Dead and Altamont, but of the Sixties themselves. As such, it is not to be missed."  blogcritics.org

"[Cutler's] memoir of his time with first the Stones and then the Grateful Dad brings to life hippie-era delights (lots of acid) and an encroaching darkness . . . he unleashes one killer road tale after another."  Rolling Stone

"[Cutler] writes with great insight and with humor about the antics of the legendary musicians he looked after and having to deal with riot police, groupies, drug dealers, mobsters and promoters, as well as friendships with rock legends like Janis Joplin, Jimi Hendrix, and former Pink Floyd frontman, Syd Barrett."  Bookviews by Alan Caruba (blog)

"Entertaining, eye-opening memoir . . . the book hits a particularly colourful stride with the Stones’ arrival in LA to finish Let It Bleed and rehearse for the dates ahead."  Uncut Magazine (U.K.)